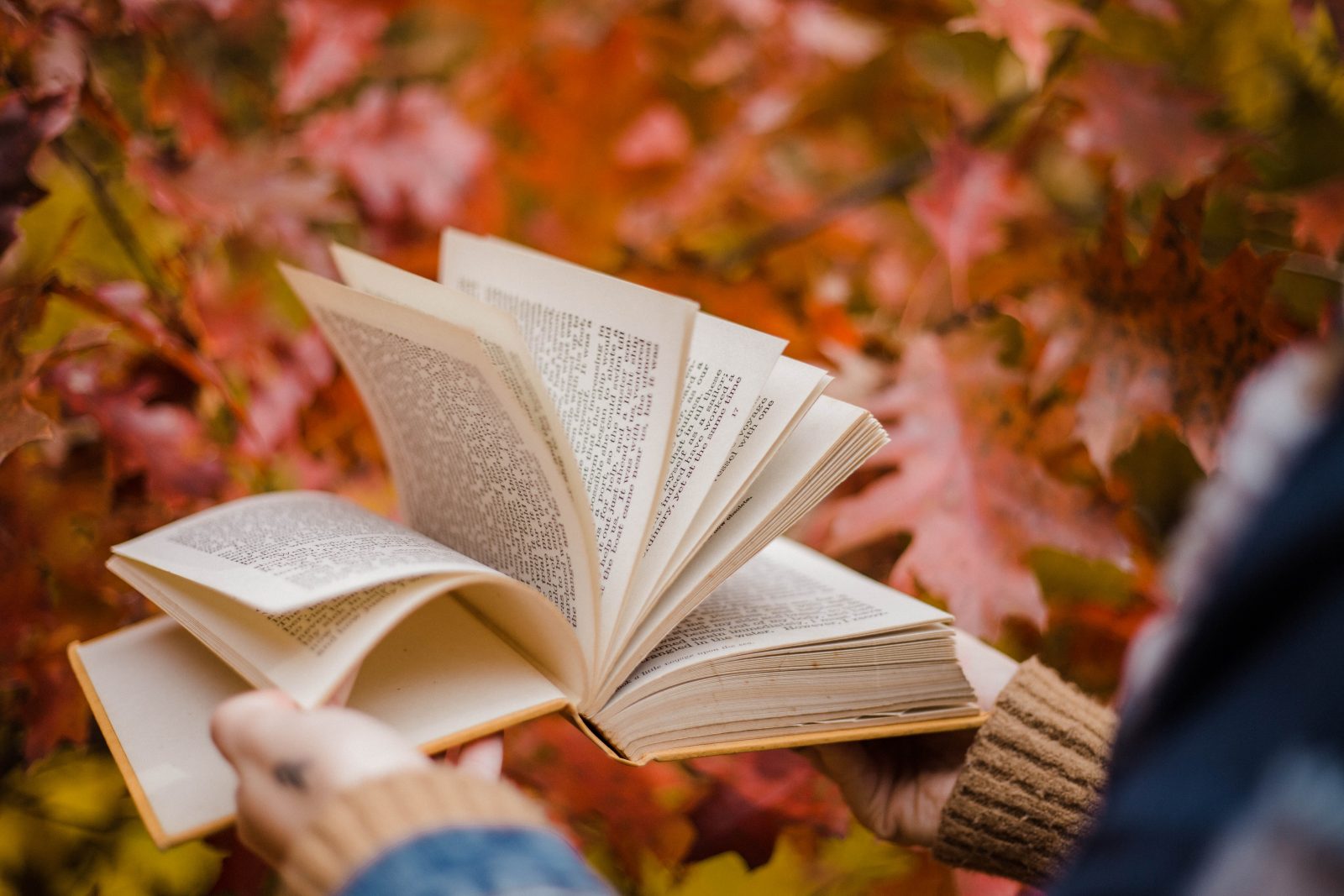 Tattoos are for everyone. That much should be plain these days, but it bares repeating every once in a while. Tattoos are collected and worn proudly by lovers of cinema, anime, video games, comics, and books alike. And Literary tattoos are fast becoming a normal and celebrated niche in the tattoo world. We celebrate our love of books in a hundred different ways and one of them, as book lovers, is by etching our favourite characters, quotes, and covers onto our skin.

Let’s take a look at eleven fantastic book tattoos, from Lord of the Rings tattoos to The Handmaid’s Tale tattoos and all the great literary tattoos in-between.

Danny Elliott at Rebel Muse Tattoo, Texas does some bloody fantastic tattoos.  The majority of his tattoo art depicts colourful, bold, and vibrant interpretations of characters and details from video games, comic books, and other areas of nerd fandom. Suffice to say, if you’re in Texas and looking for a comic book tattoo or a video game tattoo, Danny is your man. Here, he has brought to life through staggering dimensionality and depth the Cheshire Cat and the iconic ‘Drink Me’ shrinking tonic in a clever and captivating Alice in Wonderland tattoo.

Harry Potter tattoos are, unsurprisingly, the most popular literary tattoos you’re likely to find. Harry Potter has a lively, enthusiastic, passionate, and dedicated fanbase so it stands to reason. The Harry Potter universe also has a diverse selection of people, places, magical creatures, themes, quotes, items, and ideas that can be turned into awesome tattoo designs. But no Harry Potter tattoo can beat this original and unique tattoo of Professor McGonagall in cat form. It’s a bright, cartoonish depiction of her in all her feline glory. We’ve mentioned this tattoo, by Chelsea Shoneck, before and awed at it then as well. It’s a marvellous and original Harry Potter tattoo that we absolutely adore.

We’ve waxed poetic about Ellis Arch’s tattoos before and here she has outdone herself once again. While it may not be to everyone’s tastes having a blade running through the head of beloved fan-favourite character Iorek Byrnison, one cannot argue with the artistry on display here. Ellis has used traditional tattoo tropes of animal heads, knives, and blood to come up with a unique and delightfully original literary tattoo in the form of this fantastic His Dark Materials tattoo. You could go for anything when it comes to a His Dark Materials tattoo: an alethiometer, a spyglass, a hot air balloon, but why not go for a badass depiction of Iorek Byrnison, armoured and strong!

Lord of the Rings Tattoo

Konstantin Schmidt (resident artist at Verlorene Jungs in Lüneburg, Germany) does some truly astonishing tattoo art. Neotrad tattoos that pop and burst with heart and colour. And while there are thousands of Lord of the Rings tattoos out there, unfortunately the vast majority are tacky and poorly executed. His, however, as you can clearly see, are something truly magical and experimental. He takes the tone and beauty of the settings – arguably the best thing about both the Lord of the Rings books and films – and transforms them into some truly breath-taking Lord of the Rings tattoos.

Game of Thrones tattoos (or A Song of Ice and Fire tattoos, if you prefer) are excessively popular at the moment. As such, finding ones that really stand out (as opposed to being some simple script or poorly-replicated portrait of an actor) can be a real challenge! Here, however, is an original interpretation of beloved character Arya Stark in all her murderous glory, designed and created by Cat No Name at Empty Project in Mexico City. It resembles Maisie Williams just enough to be recognisable, but also clearly takes inspiration from the books as well as being an original design by the artist. In fact, it has a sort of chibi anime art style to it that we absolutely adore for a Game of thrones tattoo.

Would you believe us if we said that portrait tattoos of Edgar Allan Poe are surprisingly commonplace? It’s true! Poe tattoos are a favourite amongst us literary types. And it makes sense: Poe strikes a very unique and recognisable pose. He’s an author with a face as recognisable as Shakespeare’s. And his gothic tone and themes make for some creative tattoo art. Here, for example, we have what might be the very best of Poe tattoos with a collage depicting Poe himself, his beloved raven, and a tarot-style moon and stars. Esme Baker who tattoos in Guildford, UK (my old haunt, in fact), is an absolute legend in her field. Her tattoo art – black-and-grey fine linework in a gothic and woodcut style – is utterly breathtaking. And this Poe tattoo is Esme at her finest.

Franz Kafka is one of the greats. He’s seen a surge in popularity recently, in the same way that Orwell and Atwood have, as the world grows weary once again of capitalism and our entire way of life seems to be one Kafkaesque joke. And so what better time to celebrate one’s love of the depressed Czech icon than with a Kafka tattoo? It’s a challenge, of course, since our go-to image when thinking of Kafka is a large insect. But CrocKat in Berlin has done is very proud. Her interpretation of Metamorphosis and the titular Gregor Samsa as a large insect is positively inspired, and a real treat of a Kafka tattoo. CrocKat’s work, in general, is unique and captivating.

The Handmaid’s Tale is perhaps one of the easier works of literature to be captured in ink, given both its iconic and striking character imagery and an iconic latin phrase adored and repeated by fans the world over. And here, Amanda Slater (who tattoos at Lakeside Tattoo in Richmond, Virginia) has done that very but of script proud. Tattooing a quote or piece of script can be a surprisingly creative challenge, and Slater has opted to surround the script with impressive and boldly colourful flowers. This Nolite Te Basardes Carborundorum tattoo is a real original and beautiful representation of the iconic phrase, and makes for a striking Handmaid’s Tale tattoo.

Terry Pratchett’s Discworld is one of the most beloved fantasy book series’ in literary history. And many a fan has come and gone to get artistic interpretations of his work etched on their skin forever. The majority of them, unsurprisingly, are of the Great A’Tuin – the World Turtle who carried the Discworld on its back, supported by four colossal elephants. Many of these tattoos, however, suffer from an excess of detail that can ruin the effect. Stefanie Mader in Aschaffenburg, Germany has struck just the right balance here, though. She has interpreted the World Turtle and adapted it into a gorgeous Discworld tattoo that’s recognisable, charming, beautifully executed, and something Sir Terry would be proud of.

Of all the world’s authors, Neil Gaiman might be the one with the most dedicated and enthusiastic fanbase. As such, tattoos of his characters and quotes can be found on the skin of thousands of people the world over. Especially his masterpiece comic book series: The Sandman. But here we have a fantastic, exquisite depiction of Coraline. A bold, defining statement of love for a creator’s work, and an incredible piece of Coraline tattoo art by Michelle Maddison in Edinburgh, Scotland.

Our bonus tattoo isn’t from any author in particular, but rather something more general. If you want to show your love of reading, and of books and literature in general, but you don’t want to focus on one author in particular, why not just get a tattoo of books? It’s a difficult thing to pull off and make look good, but of all the many books tattoos we’ve seen, Marilou Legault-Mercier in Quebec, Canada has done it the best. She has taken a stack of books, chosen the right colour scheme, moulded them perfectly to the skin, and added a few extra flourishes like the Deathly Hallows tattoo to make it something original and playful. A fantastic way to show what books can mean to a person, and absolutely the best books tattoo we’ve seen.