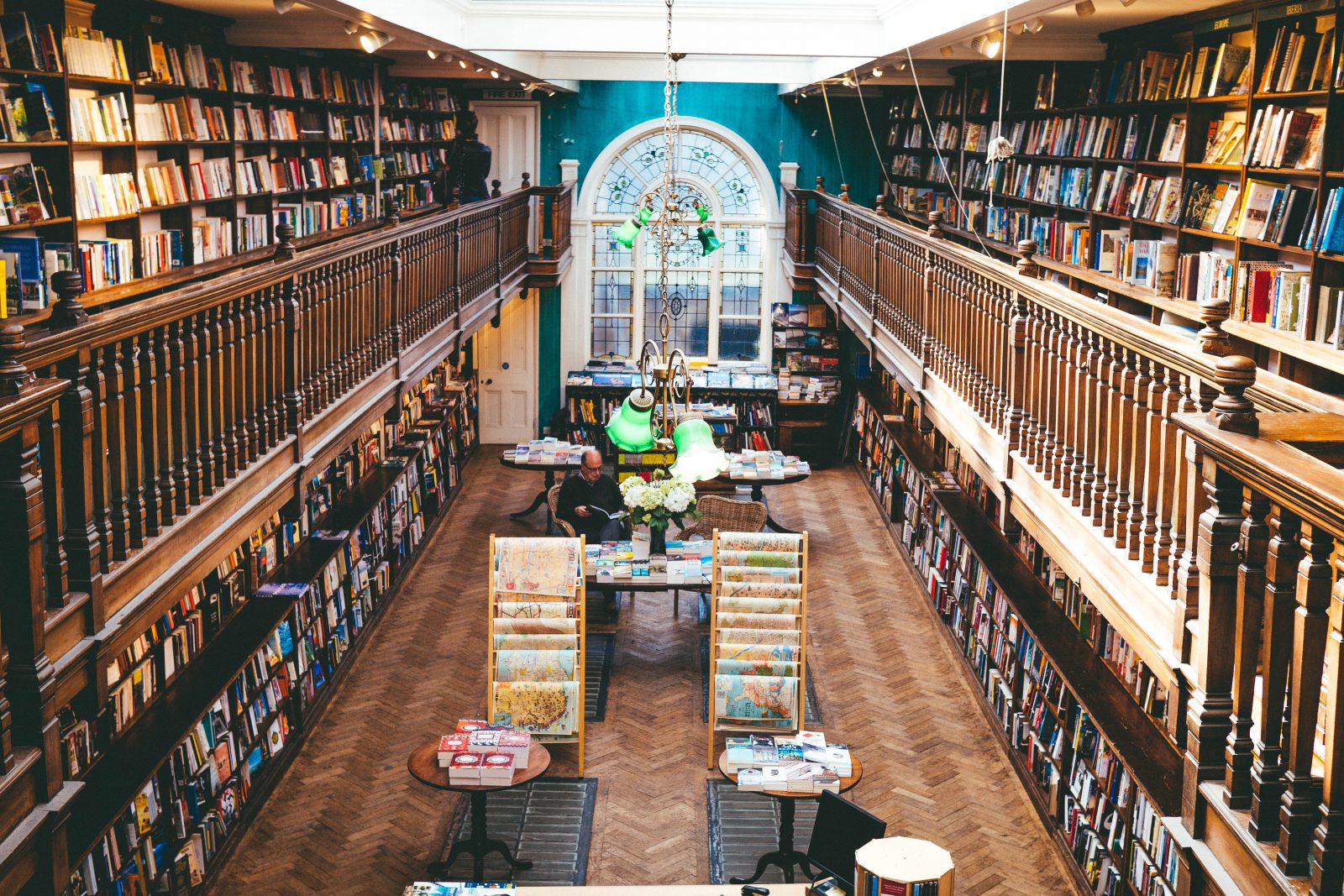 12 Magical Harry Potter Gifts for Kids of All Ages

Where else but London can you find such a marvellous selection of eclectic, unique, and utterly special bookshops? These beautiful London independent bookshops exist as champions of feminism, LGBTQ rights and values, left-wing politics and ideals, and celebrations of the written word in all its strength and beauty. Each of these ten bookshops has something uniquely wonderful about it, and deserves your time, love, and dedication. Support them, show them you care, and buy their books. The world of literature would not be as rich, diverse, and wonderful as it is without them. These are the 10 best independent bookshops in London.

Tip: If you’re looking for luggage storage while you’re exploring London then Luggage Hero has you covered.

London’s newest and already most impressive independent bookshop is The Second Shelf. Owned and managed by American writer A.N. Devers. Devers moved from New York to London’s Soho neighbourhood and opened The Second Shelf, a shop which has become an immediately powerful weapon in the fight for gender equality in the literary world. The Second Shelf sells, as their site describes, “rare and antiquarian books, modern first editions, ephemera, manuscripts, and rediscovered works by women.”

The Second Shelf, an adorable and sweet little bookshop hidden in a little court in Soho, opened its doors in late 2018 while we at Books and Bao were based in Tokyo. As soon as we landed at Heathrow, The Second Shelf was literally the first place we visited. Having a store of this calibre, owned by a woman so self-assured and inspiring, is a true gift to London.

The world at present can seem like a dark place for many of us. The book, as Esra Pound once said, should be a light in one’s hand. And what better kind of book to fan the flames of resilience against evil than ones that come from the left? Perhaps, as a far-lefty myself, I’m biased, but if you’ll allow me one more pretentious quote, I always felt a big connection with what Prime Minister William (great name) Gladstone once said: “Liberalism is trust of the people tempered by prudence. Conservatism is distrust of the people tempered by fear.”

Gladstone also once said that books are delightful society. And I’m sure that the people at Bookmarks (obvious pun is obvious) agree. Bookmarks is a London independent bookshop that sells books on politics, history, and society all from a socialist perspective. It’s a bookshop worthy of the support of anyone who cares for truth and good in the world. We need more spaces like Bookmarks in the world.

One of London’s most legendary bookshops, Gay’s The Word, is another very special independent bookshop which boasts of the welcoming and diverse atmosphere that London offers. It’s a bookshop that couldn’t legally exist in many parts of the world, a fact that makes it all the more important to give your love, attention, appreciation, and money to.

Gay’s The Word has been out and proud since 1979 and even played a major role in the movement known as Lesbians and Gays Support the Miners. The alliance would often meet at Gays The Word back in 1984-85 and collect money in support of the miners’ strikes of the Thatcher era.

Gay’s The Word has a glorious history of hosting literary events and book launches (including the momentous recent launch of Indonesian poet Norman Erikson Pasaribu’s collection Sergius Seeks Bacchus – an event that Norman could sadly never have done in his home country). Gay’s The Word is a celebration of liberal progress, of standing for your rights, of the transformative books written by LGBTQ writers from around the world.

Stanfords (established in 1853) is a bookshop that prioritises travel over all other things. Travel writing, travel guides, maps, globes, and translated literature. It’s a bit of a dream shop, from where we’re standing. And, in fact, Stanfords also has a Bristol branch which was immeasurably impactful on the very existence of this site. During our time living in Bristol in 2016, we frequently visited Stanfords and were inspired to buy and devour book after book on Asian travel and translated literature. Thus, Books and Bao started to take shape.

This is the power of a good bookshop: without Stanfords, we would not exist as a site. For that, we are eternally grateful to Stanfords and what it has accomplished as a bookshop.

It can bring more than tear to the eye considering all the great women of literature who, over the past two or three centuries, have fallen into obscurity or were never given their chance at all. Persephone Books is a publisher and bookshop fighting to clear that fog of obscurity.

Persephone Books is one of the most delightful little independent bookshops in London, just round the corner from where Charles Dickens once lived. Here, you’ll find a few recent books and essays by modern women, but 95% of the shop is a proud display of once-out-of-print and almost-forgotten women authors, mostly from the 19th and 20th centuries. They have over 100 books now, and you can either visit the shop and take your time reading a few blurbs and picking up one that grabs you, or you can do some online research, call up the shop, and have your book of choice shipped out. They also do a newsletter featuring reviews from bloggers and other publications. Persephone is a joyous celebration of the almost-forgotten women of literature that deserves endless praise for what it has accomplished.

Our big love after translated literature is comic books. And Gosh! is the best independent comic book shop in London.

Gosh! understand the breadth of comic books. They stock translated comic books from across the world, experimental and little-known comics from small art-house publishers, as well as the biggest names in the industry. Comics are a medium of literature that’s very close to our hearts. That love stretches from the campy adventures of classic DC Comics all the way to the very best award-winning graphic memoirs of Fun Home and Persepolis. And, as die-hard comic book lovers, we couldn’t appreciate more the range and quality of comics stocked by Gosh!

Word on the Water

There’s a cold war that never ends between London and the other great cities of the West: a hipster war fought with artists, fashion designers, markets, cafes, and bookshops. Cities like Berlin, New York, and Bristol give London a run for its money but, bitch, please. London has Word on the Water.

Word on the Water is an independent bookshop that floats. And it floats on Regent’s Canal near King’s Cross in an old 1920s Dutch barge. It is perhaps the most romantic place in all of London to go book shopping. A tranquil environment where you can find really, fantastically well-priced books. The barge also has a friendly dog, a warm stove, and frequent live music playing on-deck.

There are, in fact, five branches of Daunt Books in London: four smaller ones and a flagship store in Marylebone near Tottenham Court Road. The flagship store is an enormous Edwardian building with an arched window of glass at the back, framed on either side by wooden walkways walled by bookcases.

The very best thing about Daunt Books, from our perspective, is that it stands for what we stand for: celebrating books by celebrating countries. Daunt Books categorises its books by continent and country: if you go to the Asia section, you’ll find wall-to-ceiling books on China, Japan, Korea etc. Fiction, biography, and non-fiction all blend together here because the priority is celebrating cultures and nations rather than strictly categorising by genre or type. We love this shop and its philosophy dearly, and it is perhaps the most grand and beautiful bookshop in London.

In Notting Hill, that iconic British film of British Britishness featuring an American film star, Hugh Grant’s character owns a delightful little travel bookshop on Portobello Road. Well, that bookshop is real, and it did originally exist as a travel bookshop when it opened in 1979. Today, you’ll find a wider range of genres and styles when you visit (perhaps as a result of all the confusion felt by people who visited the film’s version of the shop).

Thanks to Notting Hill’s massive success (we re-watch it on a yearly basis), The Notting Hill Bookshop has become a frequent destination for tourists visiting London. And with good reason: it’s a quaint and friendly space that very much epitomises the local English bookshop, and thus one of the very loveliest independent bookshops in London. And it’s on one of the most vibrant and eclectic streets in London.

Reinventing the concept of the bookshop is a behemoth undertaking, but Libreria has done an impressive job. And where else would you attempt such an undertaking than East London? As Libreria’s own website explains, “Our shelves are arranged according to broad themes like ‘Wanderlust’, ‘Enchantment for Disenchanted’ and ‘The City’, so you’re constantly encountering titles you might not have come across otherwise.

Browsing in our bookshop is a world away from the narrow algorithmic recommendations of Amazon.com.” Statements like these are what really raise book-shoppers’ intrigue levels to their peak, and draw people in from all over the city. Libreria is a fantastically modern space with a dynamic aesthetic, but its mission statement is far more traditional, encouraging a love and a dedication to literature and the written word. We respect and adore everything that Libreria manages to achieve, and we are so glad they exist.

12 Magical Harry Potter Gifts for Kids of All Ages