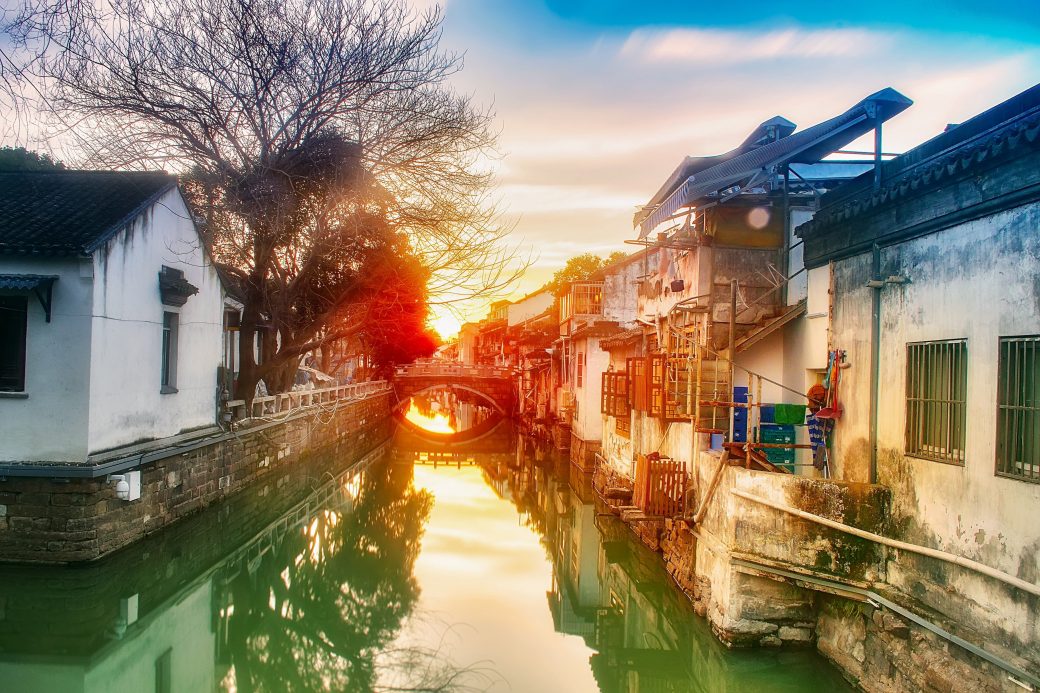 Suzhou is one of China’s most friendly, explorable, and unique cities. It blends classical streets and architecture with the excited hustle and bustle of modern Chinese life. Suzhou is also a stone’s throw from Shanghai and, if you happen to be based in Shanghai for a few days or a few years, it’s quick and easy to get from Shanghai to Suzhou by train. A day trip to Suzhou is the perfect weekend escape from the metropolitan scene of Shanghai, offering a glimpse into the more traditional side of life in China.

Getting from Shanghai to Suzhou by Train

Taking the train from Shanghai to Suzhou, and back from Suzhou to Shanghai is quick, cheap, and easy. So easy, in fact, that many people who live in one of the two cities will take frequent weekend trips to the other without giving it any thought, as we often did when we lived in the heart of Shanghai. So, how do you get from Shanghai to Suzhou?

The entire train ride from Shanghai to Suzhou takes only 30-40 minutes, making it an incredibly cheap and convenient day trip from Shanghai!

What to Do in Suzhou

So, you’ve arrived from Shanghai to Suzhou Railway Station and now you’re wondering how to spend your day in Suzhou. The first thing to do is head to Pingjiang Road.

Of all the avenues, roads, and streets in Shanghai and Suzhou, Pingjiang Road is easily the most beautiful, most historic, and most unmissable. As soon as you arrive at Suzhou Railway Station, wander over to Pingjiang Road, start at one end and stroll slowly along to the other end.

Pingjiang Road is around 1.5km long and, as you make your way along it, you’re becoming part of two thousand years of Chinese history. This is what is so spectacular about Pingjiang Road: its history remains so wonderfully intact. In the 20th century, China underwent such a painful and dramatic transformation under the dictatorship of Mao Zedong. China’s cultural revolution did exactly what you’d expect: it levelled ancient temples, attempted to eradicate religions like Buddhism and Taoism, and brought about a forced modernity that covered over the ancient beauty of China. But not everywhere; not by a long shot. And Pingjiang Road is the best example of that is Suzhou.

What you’ll see and experience on Pingjiang Road is the majesty and uniqueness of Chinese culture at its most raw and pretty. Much of Pingjiang Road is ancient stone bridges which arch over canals that frequently criss-cross Pingjiang Road. Each time you find yourself on one of these stone bridges, pause to consider the two millennia of history captured in this place. See the old wooden houses, red hanging lanterns, and narrow side streets.

As you wander down Pingjiang Road, you’ll find boutique shops which sell artisan products like leather bags, traditional clothes like Chinese qipao, and hand-carved wooden charms. You’ll also find plenty of quaint bars and cafes lining your walk where you can refresh yourself before heading on to the Humble Administrator’s Garden.

The Humble Administrator’s Garden might be the most famous garden in any Chinese city – certainly in Eastern China. It beats any garden found in Shanghai, including Yu Garden, and is another one of the must-visit things to do in Suzhou.

The beauty of Chinese gardens, much like Japanese gardens, is that there is a unique mesmerising quality to them regardless of season. Whether you visit in spring, summer, autumn, or winter, you’ll find the gardens full of captivating sights, smells, and calming atmosphere.

The Humble Administrator’s Garden is the one garden in all of China which most resembles a painting. It is a perfectly maintained, vast, respected, calming, and soothing place to visit. A friend of ours, a fellow Brit who has spent many years of his life living all over China, finally decided in his late twenties to settle in Suzhou because, as he said, no other city comes close to the China of his dreams than Suzhou. And one of the reasons for that is the folk tale majesty of the Humble Administrator’s Garden which, as of 1997, is an official UNESCO World Heritage site.

Tiger Hill is a must-visit attraction in Suzhou. Along with Pingjiang Road and the Humble Administrator’s Garden, Tiger Hill completes the trilogy of picturesque and historic sites of Suzhou. The name Tiger Hill was either given due to its appearance being reminiscent of a crouching tiger, or the possible legend of a white tiger appearing on the hill after King Helu of the Western Zhou Dynasty was buried there in 496BCE. But what, exactly, is there to do on Tiger Hill?

To start with, Tiger Hill has its own Excalibur legend: that of Sword-Testing Rock. On Tiger Hill is a small, smooth rock that has been perfectly and cleanly split in two, supposedly by a legendary sword many hundreds of years ago.

The most impressive monument on Tiger Hill, however, is the first thing you’ll see: Tiger Hill Pagoda (or Yunyan Pagoda). Originally erected in 327CE and rebuilt in 1871CE, Yunyan Pagoda is perhaps the definitive symbol of Suzhou; a sacred monument of the city. What makes it unique, aside from its magnificent stature, is the fact that it’s tilting. Having stood for almost two thousand years, Yunyan Pagoda has gradually leaned further and further, giving it the nickname: The Leaning Tower of China.

Read More: Where to Find Home Comforts in Shanghai

Where to Stay in Suzhou

Although Suzhou can easily be conquered in a day trip from Shanghai, to properly see everything the city has to offer, and to take your time in doing so, you might want to consider staying for a night or two. If you want to, and you’re wondering where to stay in Suzhou, here are some great choices:

The traditional beauty of Garden Hotel almost beggars belief. On the inside, it’s a modern hotel with delightful fixtures and comfortable beds. And on the outside, it’s a maze of stone bridges, ponds and brooks, and covered wooden walkways like something out of a traditional Chinese storybook. For pure traditional aesthetics, you can’t do better than Garden Hotel.

The best thing about Suqi Guesthouse is its location: situated as it is on Pingjiang Road – the best historic street in Suzhou. Matching the historic beauty of Pingjiang Road, Suqi Guesthouse offers rooms with Japanese tatami mats, futon-style beds, and even traditional wooden bathtubs. But it certainly doesn’t sacrifice comfort for the sake of tradition. It’s an air-conditioned and relaxing place to stay.

In case you’d rather forego staying in a traditional Chinese hotel, and would prefer to stay in a modern high-rise hotel, you absolutely can at Oakwood Hotel and Residence. This ultra-modern and sleek hotel has all the trappings, style, and comfort of the kind of modern hotel you’d expect in New York or London. And that includes a fantastic breakfast buffet of European food choices and coffee.

If you’re thinking of living and working in China, or even just visiting for a week or two, it’s really important to know that you won’t have access to websites like Google, YouTube, Facebook, or Twitter while you’re in China. This is thanks to what we’ve come to call the Great Firewall of China. To circumvent this issue, definitely consider getting yourself a VPN (Virtual Private Network) for your travels. VPNs allow you to access all the sites that are blocked by China’s firewall, and they’re how foreigners living and working in Shanghai are able to continue their lives as normal. Check out this guide to learn more about VPNs.