Sora Kim-Russell is a literary translator based in Seoul. Her recent publications include Kim Un-su’s The Plotters; Hwang Sok-yong’s At Dusk, which was longlisted for the 2019 Man Booker International; and Pyun Hye-young’s City of Ash and Red, and The Hole, which won the 2017 Shirley Jackson Award for best novel. Her forthcoming translations include The Law of Lines (a working title) by Pyun Hye-young; On the Origin of Species and Other Stories, by Boyoung Kim, which she is co-translating with Joungmin Lee Comfort; and The Prisoner, an autobiography by Hwang Sok-yong, which she is co-translating with Anton Hur. Her full list of publications can be found at sorakimrussell.com. 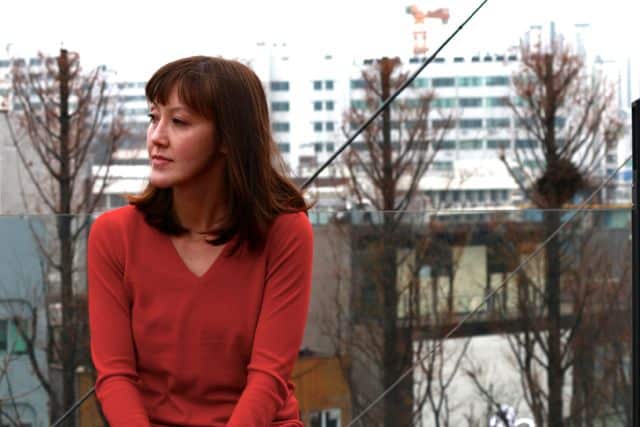 I don’t have a very exciting origin story. I started out as a poet and aspiring fiction writer, so at the outset, it was mostly me attempting to reverse engineer fiction writing. I thought that if I translated enough stories—i.e. take them apart and put them back together again in another language—then I would learn how to write my own. But translation ended up taking over, and now the most I manage of my own writing is the occasional essay. One of these days, maybe, I’ll figure out how to divide my energy well enough to do both.

Do you find any unique challenges with translating the Korean language?

This isn’t specific to the language itself, but one thing that can be challenging is the relative lack of developmental editing in Korean publishing, i.e. where an editor gives the writer feedback on plot development, character development, voice, pacing, and so on. From what I’ve been told, most literary editing in Korea is limited to copyediting. When books are sold to US publishers, some editors will edit the book the same as if it were written in English, which can catch writers off guard, especially considering it’s usually a book they finished years before and weren’t prepared to have to dive back into. It can also mean more work for the translator, who would not only have to retranslate those edits but also help with the negotiation between writer and editor. For those reasons and more, a lot of translators wrestle with how much developmental editing to do on our own as we translate, but it’s a bit of a slippery slope. It’s easy to get carried away with your own vision of the book and end up undoing the right choices that the author made in the first place.

What is your methodology? How do you approach translating a novel?

I’m probably no different from other translators when it comes to method. I try my best to capture the writer’s voice and to not ruin what made the book worth reading in the first place. For some writers, I might focus more on creating a fluid, storytelling voice, while others might demand more attention to symbolism and word play. It’s all fairly subjective though—reading is such a private experience, but as translators we end up making ours public.

This might be a bit of a tangent, but I think that readers have no idea just how many choices and how much strategy goes into a translation. Readers and reviewers alike enjoy nitpicking our work—we’re always either “too faithful” or “too unfaithful” for their liking (as if those are our only two choices). For the most part, they don’t know what sort of decisions you made regarding the overall balance and tone of the text, let alone how the book was edited by the publisher. The latter point seems to surprise people the most—the general impression seems to be that translators work entirely alone and that every choice is ours, from the cover art to the final word of the novel, and that’s simply not how it works.

What has been your favourite book to translate so far, and why?

I was going to make a joke about picking a favorite child, but in all honesty, whatever book I’m translating at the moment becomes my favorite. Each book presents its own joys and challenges and teaches me something new about how to translate. So I really can’t pick one. It’d be easier to enumerate what charmed me about each book.

Mostly online articles about how to get a baby to sleep longer.

Read. Read widely. Read out loud. Attend poetry and prose readings, especially by writers who know how to perform their work. If you want the words to jump off the page, then you have to understand the aural side of writing. But don’t ignore the page either. Pay attention to what writers do. Writing and translation are physical—it’s not just about capturing some ephemeral spirit of a text, it’s about the arrangement of words on a page and the way those words sound when spoken aloud.

Also, learn the business of publishing. It’s not enough to be an artist, you also have to know how to read a contract, negotiate for yourself, work around deadlines that are not always announced ahead of time, and live on a budget with payments that do not arrive at scheduled intervals.

And finally, understand that becoming a translator is a learning process. I think there’s a fair number of us who jump into translation having experienced some success with language acquisition or with our own writing and therefore think that we already know how to translate. Or that we’re going to be creative in ways that others haven’t been. But then that first bit of criticism comes along and knocks us back. I’ve seen this happen with my students, and I’m sure I did the same thing when I was starting out. Our ego takes a blow, and we question whether we’re really cut out for this work. But as painful as that can be, what we hopefully gain from it is the understanding that literary translation is a specific skill set of its own that is learned, developed, and refined over time through practice and feedback.

Thanks for reading! If you’re a translator and you’re interested in being interviewed by us, please feel free to reach out!

You can also read some of our other translator interviews here.