Is the Demon Slayer Manga Worth Reading?

It’s an irrefutable fact that Demon Slayer: Kimetsu no Yaiba is the biggest anime in the world right now. Hype surrounding the Demon Slayer anime is intense, and the Mugen Train movie has become one of the biggest box office hits in the history of Japanese animation.

This is a reasonable question, given the fact that the Demon Slayer anime is flat-out stunning to watch, with some imaginative animation, pitch-perfect pacing, and gorgeous effects.

When we have an anime of this pedigree, is the manga source material worth investing in? Not to mention the fact that, unlike popular adaptations like Tokyo Ghoul, the Demon Slayer anime is faithfully adapting the original manga.

In spite of these genuine and reasonable caveats, the Demon Slayer manga is still absolutely worth investing in. To prove my point, I’ll be writing this with a slightly more personal bent than I usually do, talking about my own experience with reading the Kimetsu no Yaiba manga and the reservations I had with it beforehand.

Let’s start with why many fans of the Kimetsu no Yaiba anime, myself included, may feel less inclined to read the source material. While every anime and manga fan is different, I usually refrain from reading a manga if its anime adaptation is doing a good enough job.

This is because I read an awful lot of novels as it is and I don’t need to add even more reading material to my stack.

There have been many exceptions to this, however. For example, I started reading the Promised Neverland manga before it was adapted into an anime and, when I finally watched the anime, I didn’t think its animation and cinematography measured up to the tone and design of the original manga.

Another example is Tokyo Ghoul, the anime adaptation of which, I had heard, doesn’t measure up to the manga. So I’ve never seen it. Instead, I went straight for the Tokyo Ghoul manga instead.

Having seen a few panels and flicked through volumes of the Demon Slayer manga in bookshops, I got the immediate impression that this was another Attack on Titan situation, where the anime is simply far prettier than the manga.

Another reason is money. Demon Slayer: Kimetsu no Yaiba Season 1 covers approximately six volumes of the manga. That’s a large investment in and of itself, and then most readers would simply feel compelled to continue buying and reading. Alternatively, they could simply wait for Demon Slayer Season 2 to air and save a heap of money.

Why You Should Read the Demon Slayer Manga

So, to recap, the arguments against reading the Demon Slayer manga are the following:

I still maintain that these are legitimate arguments for avoiding the Demon Slayer manga and sticking to the anime. However, there is an irresistible charm to the writing and art skills of Koyoharu Gotouge that is almost intoxicating in its strength.

I shouldn’t have been fooled by my own first impression when it came to the art of Demon Slayer: Kimetsu no Yaiba. Having been, in the past, an avid comic book collector, I should have keenly remembered all the times I flicked through a comic drawn by a more experimental artist, turned up my nose, taken the plunge anyway, and been proven completely wrong.

It takes reading something from the beginning, and letting the narrative drawn you into its world to the point that you forget where you are or what time it is, for most readers to really appreciate the appeal and the power of an artist’s work. Simply put, Gotouge’s art is far from ugly.

There is a gorgeous rawness to the art of Demon Slayer. It meshes so thoughtfully with the tone of the series — one which flits delicately between heartwarming family love, campy comedy, intense thrills, and chilling horror. While the art of the Demon Slayer anime is unmatched, the manga stands separately enough from it to be worth the price tag alone.

That same deliciously rhythmic and satisfying pacing that carries addicted fans of the anime from one episode to the next is also absolutely present here in the manga. In fact, in many ways, it feels even tighter. That is often the case with comics and manga, with readers being allowed the choice to read as quickly or slowly as they want to.

But the lack of detail in Gotouge’s art actually works in her favour here, encouraging the reader to be carried along by the river-like flow of the action and not to dwell quietly on any specific panels or pages. This ensures that the thumping pace is maintained.

So, while I still understand the argument that the anime is prettier than the Demon Slayer manga, Gotouge’s rough, raw art actually serves the plot and pacing of the story. Not only that, it also meshes very well with what we see of the mangaka’s own personality.

Each volume of the manga features commentary from her — through an adorable alligator persona — that demonstrates a sweet, timid charm. That same charm can be seen in the rough-around-the-edges art style of the manga itself.

It almost feels, at times, like Gotouge was enjoying herself so much, and feeding so much raw emotion into her story and characters, that she hardly had time to waste on frivolous, irrelevant details. And that is undeniably endearing.

None of this addresses the issue of money. But then, few things can. How you spend your money is up to you. The manga is finished, which means that, if you want to experience the completed story long before the Demon Slayer anime wraps, you can.

Judging from how much of the manga was adapted by Season 1 of the anime, the show will probably air for three seasons. If you can wait, feel free to do so. If you can’t, here is the Demon Slayer manga, ready for you to enjoy.

We often have to measure time against money against fun factor, and the end result will be different for everyone. The facts remain that the Demon Slayer manga has been faithfully adapted by its anime counterpart, and the show will likely continue to do so. The show is as popular as it is for a reason. But the manga has also flown off the shelves for a reason, too.

That reason is this: The Demon Slayer manga is worth reading, for fans of the anime and newbies alike.

I should also add a quick postscript for budding fans who have yet to watch the anime because they wanted to check out the Kimetsu no Yaiba manga first. That postscript can be slimmed down to a simple recommendation: read Demon Slayer. It is an absolute pleasure.

Demon Slayer is one of the few stories, in manga or anime form, that can be enjoyed by anyone. It is a perfect manga and a perfect anime. Wherever you choose to start, know that you’ll have a great time. You’ll laugh, cry, scream, sigh, and feel elated the entire time.

Choosing the manga or the anime to begin with really depends on how much you value your time over your money and vice versa. It’s your choice, but both are equally worth your investment. I’m such a fan that I’ve chosen both and I’m happy I did.

If I were to go back, I’d probably start with the manga and then enjoy watching the anime fill the story with colour and animation. But you do you.

All of this hype and excitement being said, there is every chance that the Chainsaw Man anime and manga may live to outshine even Demon Slayer. Only time will tell. Previous
Is the Tokyo Ghoul Manga Worth Reading? 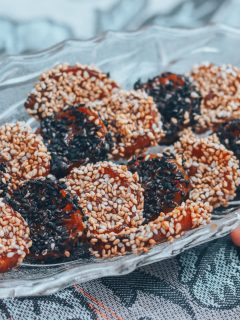 Next
Discover Korean Vegan Food and Temple Cuisine
Click here to cancel reply.
As an Amazon Associate, we earn from qualifying purchases at no extra cost to you. This post may contain affiliate links that earn us a commission.