Why You Need to Read Spy x Family (Manga)

Much like how Netflix ushered in a new Golden Age of TV, a similar age has hit the world of shonen manga and anime. Every decade or so, we’ve had a wave of instant classic shonen manga, but the past few years has seen a real revelation.

From future classics like Demon Slayer and Hell’s Paradise: Jigokuraku to boundary-pushers like The Promised Neverland and Attack on Titan, we have been truly spoiled for original and exciting shonen manga.

Out of left field, and continuing that trend of pushing boundaries, comes Spy x Family by Tatsuya Endo. And here’s why you need to read Spy x Family right now.

What is Spy x Family about?

Written and drawn by Tatsuya Endo, Spy x Family is a shonen manga, originally serialised on the Shonen Jump+ app but is now available in tankobon volumes. The series began in 2019 and is still ongoing.

Spy x Family is set in an invented pair of countries — Ostania and Westalis — that bear a striking resemblance to mid-20th Century East and West Germany.

The fashion and technology brings to mind the 1950s and the architecture is beautifully Central European. Also, the capital of Ostania, where the manga is primarily set, is called Berlint.

All of this is to say that the setting of Spy x Family is gorgeous. From the clothes to the cars, it’s a beautiful world to live in.

The story begins with tensions brewing between these two countries. A dangerous politician named Donovan Desmond, along with his National Unity Party, is threatening peace between Ostania and Westalis.

Our protagonist is a Westalis spy, codename Twilight. He has been tasked with the mission of getting close to Desmond. The only way to do so, however, is to settle in Berlint, start a fake family, and use his adopted child to infiltrate an elite school which Desmond’s children attend.

This is such a simple yet genius setup for a shonen manga that mixes so many genres: action and suspense, family drama, and comedy. You’ll start to read Spy x Family for the action and political intrigue but stay for the lovable characters and hilarious comedy beats.

When Twilight arrives in Berlint, he takes the name Loid Forger and heads to a rundown orphanage to select a child for adoption. He settles on a six-year-old girl named Anya who, as it turns out, is a telepath.

Anya keeps her powers secret from Twilight and everyone else, but they still come in useful as the plot progresses. Anya is, in many ways, the star of Spy x Family. She is a sweet, wide-eyed, curious, optimistic but nervous child. The best comedy moments of this manga begin and end with her.

Twilight also needs a wife — a mother for Anya — and he soon finds one in Yor Briar, a timid but kind young woman who works at city hall. Yor also, however, moonlights as the city’s deadliest assassin.

Yor agrees to be a part of this strange family as a means of saving face and keeping her friends from talking. Like Twilight, Yor needs to maintain an illusion of normalcy, given how volatile her secret second job is.

Naturally, this fake family, each one with an absurd secret, is a breeding ground for comedy, drama, and affection, all of which is explored in every single chapter as you read Spy x Family.

Once Twilight has his family unit all nicely designed, the real story begins: getting Anya into Eden Academy and getting her close to the son of a dangerous but secretive far-right politician.

The drama and comedy of Spy x Family relies on the relationships between the three members of the Forger family. The school entrance exam, studying at home, performing as an ordinary family, keeping their secrets from one another, sneaking out to work as a spy and an assassin.

The most impressive thing about this current new Golden Age of shonen manga is how genres are being blended and boundaries are being pushed. The Promised Neverland was the single best example of this as it blended horror, mystery, adventure, and sci-fi. Following in its footsteps is Spy x Family.

The biggest and best reason to read Spy x Family is the manga’s outstanding blend of comedy, drama, and action. Let’s look at each of them separately.

The Comedy of Spy x Family

Comedy is the biggest and best reason to read Spy x Family. This is a laugh-out-loud shonen manga series. The three protagonists of Twilight, Yor, and Anya are written with humour in mind from page one. Their distinct personalities mix into a perfect cocktail of comedy.

Twilight’s cool-headed professionalism is often broken by Anya’s unpredictable childish behaviour, and the fact that Yor (an assassin) is able to do things that escape a spy’s notice frequently unnerve him to a hilarious degree.

Yor’s internal dichotomy between cold-blooded killer and meek office girl is funny in its own right, but the comedy is dialed up to eleven when she’s seen in action. Her physical skills counterbalance her sweet words in a shock-comedy kind of way that is simply but always entertaining.

Anya, however, is the star of the show. As someone who cannot stand children, even in fiction, it was a delightful surprise to find myself becoming obsessed with her personality, her capacity for love, and her hilarious antics.

The fact that Anya knows her parents’ secrets, knows Twilight’s mission, and therefore knows what’s at stake, means that she is as stressed as he is. She is constantly trying to perform well for the sake of his mission, but she is also only six and not the best student.

Anya’s willingness to try, to work, to learn is endearing, but her confusion and frequent misunderstanding adds a layer of comedy that perfectly balances the drama and strain built by the high stakes of Twilight’s mission.

This is a top tier comedy trio whose actions and relationships bring constant new surprises for the reader and for each other.

The Drama of Spy x Family

It’s hard to invest yourself fully in an ongoing series solely on its capacity to make you laugh. Luckily, the core reason to read Spy x Family is its drama, plotting, and story beats. Combining a Bond-inspired spy drama with an intimate family drama is genius writing.

The story of Spy x Family is able to effortlessly shift between action-focussed moments of espionage and quiet at-home scenes of growth between our protagonists. The variety of settings — home, school, office, street — also helps to keep the pacing high.

We have Twilight’s central mission to hook us, and every chapter moves that plot forward. It’s exhilarating to watch how a fake and dysfunctional family of misfits have international peace on their shoulders; one of them doesn’t even know it and another knows but doesn’t understand. Because she’s six.

There is a macro/micro balance in the drama of Spy x Family, with the big international politics always urging the plot forward and the small family/school drama making up the unique events of each chapter.

And, of course, there’s always the question of whether or not this fake family will morph into something more sincere. Twilight and Yor’s relationship is more akin to a business deal than a marriage, but that doesn’t mean it will stay that way, and Anya is a key catalyst in this gentle evolution of their relationship.

Anya herself is also an orphan with a mysterious past (scientific experimentation led to her having telepathic powers). As we learn more about her, watch her grow and learn, and — most importantly — watch her investment in this family grow, we end up falling in love with this sweet child’s loving personality.

The Action of Spy x Family

If there’s one thing that guarantees a bright future for Spy x Family (specifically an anime adaptation), it’s the action, and how that action is so beautifully drawn.

It was very tempting to write ‘animated’ rather than ‘drawn’ there. Tatsuya Endo is able to instill a level of fluidity and motion into his art that almost matches the mastery that Yusuke Murata demonstrates in One Punch Man.

As you read Spy x Family, it’s an effortless (almost automatic) task to convert the individual panels into a full animation in your mind. There is a consistent sense of progression and movement within and between panels that blurs the line in the reader’s mind between still drawings and fluid animation.

All of this leads to absolutely gorgeous action scenes. Every time Yor snaps and moves to physically defend Anya or stop a mugging; every time Twilight infiltrates an area with an improvised Agent 47-esque disguise; every time the family is caught in a chase or a fight, the action that follows is stunning.

In volume 2, there is a single panel depicting Anya punching a fellow classmate. The way in which this punch is drawn — the perspective, the detail, the rippling impact — is stunning. It’s at once hilarious, shocking, electrifying, and impactful. It is a punch you can feel.

The action of Spy x Family proves that Tatsuya Endo is a master of art, animation, set design, choreography, costuming, and action as much as he is a master of plotting and character writing.

Spy x Family is a masterpiece of genre blending. Comedy, drama, and action are juggled by Tatsuya Endo so effortlessly and beautifully. The entertainment doesn’t let up for a moment. Heartstring-pulling drama feeds into gut-aching comedy, quickly followed by intense action.

Our trio of protagonists are each as lovable, mysterious, and exciting as each other, giving you both a group and three individuals to invest your time, love, and attention in.

Special mention also needs to be made of Casey Loe’s translation. The incredible laugh-out-loud moments only land this hard thanks to his fantastic translation skills.

I was literally screaming with laughter at every line of dialogue from Henry Henderson in Chapter 4. That character is wonderfully drawn, brilliantly written, and masterfully translated. It was this character and this chapter that made me sit up and take notice of Loe’s amazing translation skills.

To put it simply, Spy x Family is a flawless manga. You need to read Spy x Family because there is no single downside, no weak aspect to be found.

If you enjoy political drama, spy thrillers, gorgeous action scenes, wholesome comedy, and sweet family drama, you’ll love Spy x Family. Whatever angle you look at it from, this is a perfect shonen manga. 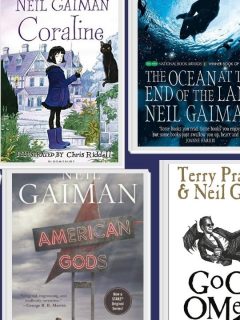 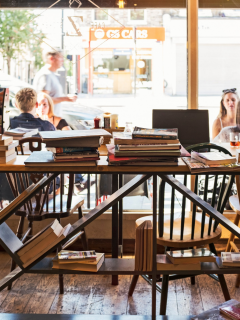 Next
8 Must-Visit Bookish Cafes & Bars in London
As an Amazon Associate, we earn from qualifying purchases at no extra cost to you. This post may contain affiliate links that earn us a commission.