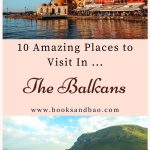 The Balkans – a geographic region in southeastern Europe- are an underrated destination, though gaining popularity over the last decade with tourists. Greece, Montenegro, Slovenia, Croatia, Bosnia and Herzegovina, Serbia, Albania, Macedonia, Bulgaria, and Romania make up this region, named for the Balkan mountains in Bulgaria.

While many might remember this region as one of ethnic strife and civil war, others recall the charming mountain villages, monasteries, and medieval fortresses. The Balkans are known for their natural beauty, with vast numbers of forested hiking trails, waterfalls, and idyllic landscapes.

There’s also traditional folklore and music as well as cultural festivals and local food and drink.

Here are some of the best places to visit in the Balkans, along with the best things to do in a day or two in each place. Many cruise ships now visit this region – whether ocean or river – and I’d highly suggest adding some time at the beginning or end of the cruise to explore the region by land.

Corfu is an island off the northwestern coast of Greece, near the border with Albania. It has a rich history in both mythology and fact; it’s known as the place where Jason and Medea got married, as an instigator in the Peloponnesian War (due to an alliance with Athens over Corinth), and as a Roman colony under Octavian.

19th-century royalty spent time on Corfu. Empress Elisabeth of Austria, known as Sisi, built her famed Achilleion home here and Mon Repos was the home of the Greek royal family and birthplace of Prince Philip. Corfu was occupied by the Italians during the Second World War.

Visitors to Corfu can visit the Pantokrator Monastery and Angelokastro fortress, which both date to the Byzantine rule, and the Old Town of Corfu, which has significant Venetian influence and is a UNESCO World Heritage Site. Other important sites include Palaiopolis, the ruins of the ancient city of Korkyra, Kardaki Temple, the Temple of Artemis, Palaio Frourio (Old Fortress), and neo Frourio (New Fortress).

Crete is one of the largest islands in the Mediterranean and the largest Greek island It is located south/southeast of Athens on the Mediterranean/North African climate line. It has a varied landscape, with white sandy beaches and the rare pink beaches of Crete to rugged mountains across the islands and offers a variety of activities making it one of the best Greek islands for honeymooners.

The island was settled by Neolithic tribes who later became the Minoans. Other inhabitants over the millennia include the Myceneans, Romans, Byzantines, Venetians, and Ottomans. Crete is most famous for its Minoan palaces including Knossos but has plenty of other exciting things to see and do. Visitors to Crete should see the old town of Chania, which boasts Venetian architecture and ruins of the Venetian city walls.

The old Jewish quarter is home to several restaurants, bars, shops, and hotels. Outside of the city, travellers can take a White Mountains safari tour which explores the caves and gorges of the limestone mountains as well as the traditional food of the region, or a boat tour along the coast of Crete.

Belgrade is one of the world’s oldest continuously inhabited cities and home to one of the most important prehistoric cultures in Europe – the Vinca culture. They evolved here in the 6th millennium BCE. The city is located at the confluence of the Sava and Danube rivers, a location of strategic importance, and strife, over its history.

It was part of several empires before being the capital of Serbia in 1841, then was the capital of the former Yugoslavia from 1918 until Serbia and Montenegro split in 2006. Belgrade has been part of over 100 wars, razed to the ground 44 times, and bombed five.

The Kalemegdan, or the historical core of the city, remains on the right bank, which is where you can visit Stari Grad and Nikola Pasic Square, as well as the Belgrade Fortress. Belgrade is considered one of the five most creative cities in the world, with a lot of cultural events and festivals to attend.

The best museum to visit is the National Museum, which has over 400,000 pieces of art. The Ethnographic Museum showcases the culture of the former Yugoslavia.

Ljubljana is located in an alluvial plain along a trade route between the Adriatic and the Danube and was under Habsburg rule until the formation of the former Yugoslavia.

Ljubljana has been the capital and largest city of Slovenia since its creation in 1991. While we sometimes think of Slovenia as being far from western Europe, in reality, Ljubljana is only 200 miles south of Munich and 150 miles east of Venice.

The main attractions in Ljubljana are the medieval castle, with its viewing tower and unique architectural features, Preseren Square and the Franciscan Church of the Annunciation, and the Town Hall. Like many other cities that span rivers, Ljubljana has some unique bridges, including the Dragon Bridge which is one of the most beautiful examples of Vienna Secession style.

Lake Bled is located in the Julian Alps just an hour from Ljubljana. Often considered one of the most picturesque places in the country, Lake Bled is a small yet delightfully packed place to visit. Some of the popular attractions include Bled Island and the Assumption of Mary Church (don’t forget to pull the wishing bell rope), and Bled Castle, high atop a cliff overlooking the lake.

Many come to Lake Bled for outdoor pursuits, like biking or hiking. Circumnavigating the lake – 6km – is easily done in an afternoon, and anyone who does this is certainly allowed a large slice of Bled Cream Cake, which is still made to the original recipe.

Bucharest is the capital city of Romania, located in the southern part of the country. It’s well known for its architecture, which is a mix of Neoclassical and Art Nouveau, Bauhaus and Art Deco, communist and modern. Bucharest is one of the fastest-growing cities in Europe, even after much of the city was damaged in the war.

The city was first mentioned as the Citadel of Bucaresti, which was home to Vlad III the Impaler, or Vlad Dracula (born in Sighisoara, Romania) – the inspiration for Count Dracula.

In the heart of the city is Lake Cișmigiu, which is surrounded by Cișmigiu Gardens. Other popular attractions include the Palace of the Parliament, built in 1980 by communist dictator Nicolae Ceausescu, which is the largest parliament building in the world, and the Romanian Athenaeum.

Bucharest is often called Little Paris, or Paris of the East, and has some very Parisian influences, especially in the city’s architecture.

Peles Castle is a Neo-Renaissance castle in the Carpathian Mountains of Romania, in Sinaia, about 90 minutes from Bucharest. It’s located along a medieval route linking Transylvania with Wallachia, two regions of the country, and was built in the late 19th century for King Carol I, or Charles I, who was the king under whom Romania gained its independence.

The first royal building in the area was a royal hunting preserve and summer palace, later known as Peles Castle. Other buildings include Pelisor Castle, Foisor Hunting Lodge, guard chambers, stables, and a power plant. Peles Castle was built as a grand palatial alpine castle in classical European styles.

It was seized by the Communist-era dictator and closed for about 20 years at the end of the regime. Today it is on lease from the royal family and receives around 500,000 visitors annually. The most notable rooms are the Hall of Honour, the Imperial Suite, the Grand Armory, the Playhouse, the Turkish Parlour, and the Moorish Salon.

Dubrovnik is a city on the Adriatic coast of Croatia; it’s a prominent tourist destination and cruise port as well as being one of the most iconic UNESCO World Heritage Sites in Eastern Europe. The city dates back to the 7th century when it was a Byzantine outpost, however, it was soon fully independent and relying on maritime trade for its prosperity.

Dubrovnik suffered extensive damage in a 1667 earthquake and later during the Croatian War of Independence in 1991, but recovered and rebuilt to become a popular filming location by the mid-2000s. Dubrovnik is most well known for its city walls, medieval city centre, fortresses, and palaces, many of which have appeared in Game of Thrones.

There are legends abounding in regard to famous faces that have spent time in Dubrovnik, and the city also hosts a multi-day festival to celebrate its patron saint, Saint Blaise.

While many early buildings didn’t survive the earthquake, the ones that did are well worth visiting: Sponza Palace, a 16th century Renaissance palace that now houses the National Archives, and the Rector’s Palace which is now a museum. Others are the St Saviour Church and the Franciscan Church and Monastery.

Mostar, in Bosnia and Herzegovina, was named for the mostari, or medieval bridge keepers who guarded the 16th-century Ottoman-era Stari Most (Old Bridge) over the Neretva River. The bridge today is one of the iconic sights of Mostar and is considered a shining example of Islamic architecture.

The city itself began as a small settlement, growing as trade between the Adriatic and the inner regions of the Balkans grew. It was under the Ottomans that the city grew into more of an urban centre. Mostar fell under Austrian-Hungarian rule in the late 19th century and remained so until after the first world war, when it became part of the former Yugoslavia.

In the mid-1990s and onwards, several other countries donated funds to restore Mostar – the bridge and the surrounding historic core, mostly.

Must-sees in Mostar include the Stari Most, the historic city centre, the Cejvan Cehaj Mosque and bazaar that sprung up around it, and the Koski Mehmed Pasa Mosque.

Kotor is a coastal town located within the narrow Bay of Kotor, a submerged river canyon surrounded by steep verdant hills. The city’s medieval core is known for its Venetian fortifications and winding old town streets, which is a UNESCO World Heritage Site and one of the best-preserved medieval old towns in the Adriatic.

Kotor has seen a huge influx of tourists over the last few years as more and more cruise ships stop here, despite this it still feels like a small town. Kotor was settled as early as 168 BCE and fortified since the early Middle Ages, although it has been ruled by various empires. After serving as a base for the Austro-Hungarian naval fleet during the first world war, Kotor became part of the former Yugoslavia.

Some of the most important sites here include St Tryphon’s Cathedral (Roman Catholic) and St. Nicholas’ Church, while San Giovanni Fortress pretty much begs you to climb to the top. The views from the top are epic. For a more quirky stop, don’t miss the cat museum, which has a huge collection of various feline-related things donated by Italian Countess Francesca di Montereale Mantica.

Written by Chrysoula — A travel blogger born and raised in Athens, Greece with a professional background in Tourism and Marketing. Through the pages of Greece Travel Ideas, she wants to help visitors make the most of their trip to Greece and introduce them to the Greek culture and traditions.