Nanjing is home to more than 7 million people, a modest population by Chinese standards. But with its proximity to the mountains and the Yangtze river, the city can feel like a cozy town compared to the all-pervasive presence of people and concrete in Shanghai.

Which is ridiculous, because “cozy town” has never been an accurate way to describe Nanjing.

The city (also called “Nanking”) was the capital of multiple ruling dynasties, beginning with the Liu Song in the year 420. But the “south capital” (Nán= south; jīng = capital) reached the height of its prominence during the early years of the Ming Dynasty (1368-1644), when it was believed to be the largest city in the known world.

Art, literature, and a system of orderly government thrived in Nanjing under the Ming, even though that dynasty eventually moved the imperial capital to Beijing (“north capital”) in 1421.

Five centuries later Nanjing was declared the capital city of the new Republic of China under the Nationalist Party leader General Chiang Kai-Shek. Over the next 10 years (“the Nanjing decade”) the city prospered, before descending into a period of stark human misery.

The Rape of Nanking

After the Imperial Japanese Army invaded China, Nanjing became the location of one of the largest mass killing events in human history. The invasion, destruction and murder of approximately 300,000 Chinese civilians by Japanese military forces is to this day a scar on the national psyche. The Nanjing Massacre Memorial Hall, which documents those eight weeks of atrocities in 1937 and memorializes the victims, is a top tourist attraction that is literally overflowing with visitors during peak hours.The long path to the museum’s entrance is lined by statues depicting scenes of civilian suffering under the Japanese occupation. 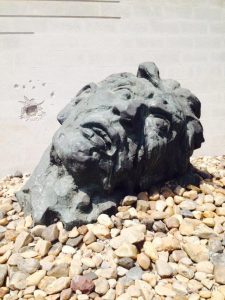 Touring the museum is a heavy experience that visitors may need to mentally prepare for. The names of the victims are etched into a gigantic wall; photos of the victims — from headshots to newspaper photographs from the period — make up the bulk of the exhibit, which thoroughly details events of rape and mass murder. “They rob and rape, they set fire and burn people alive, they even kill my three-month old little grandson.”

I saw a surprisingly large exhibit space dedicated to the American, British and German expatriates who offered shelter and protection to hundreds of thousands of Nanjing residents. The most prominent figure in this section was John Rabe, a German businessman and Nazi Party member who spearheaded the creation of the International Safety Zone. 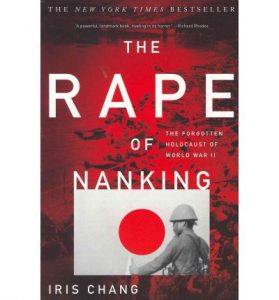 Rabe kept a prolific diary of the Nanjing atrocities he witnessed, a key source in Iris Chang’s 1997 non-fiction book “The Rape of Nanking.” Rabe’s connection to the Nazi Party (remember, Germany and Japan were allies) offered him a level of protection against the Japanese — one anecdote says there were several occasions where Rabe chased soldiers away from women they were raping or intended to rape, an action that would have usually led to a swift death — that allowed him to publicly resist and condemn the Japanese military’s brutal treatment of Chinese civilians. According to Chang, “the swastika probably saved his life.”

Now that I’ve outlined a thoroughly depressing part of China’s modern history, let me go back to its past, when the country was the planet’s leading maritime power.

Visiting the Zheng He Memorial Park

I was excited to visit the Zheng He Memorial Park after listening to some podcasts on the subject and reading the controversial  book “1421: The Year China Discovered the World.” The book focuses on the very real voyages that Admiral Zheng He led across the known world during the early fifteenth century, China’s age of exploration. The author, however, argues that some Chinese fleets discovered North and South America before the European explorers did, a thesis that most professional historians say hasn’t been proven with any hard evidence. 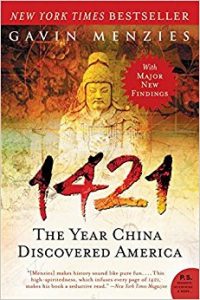 What historians do agree on is that, between 1405-1433, Zheng He led seven naval expeditions to modern southeast Asia, India, the Persian Gulf, the Arabian peninsula and the eastern coast of Africa.

The fleets were comprised of huge, sturdy,  flat-bottomed wooden treasure ships escorted by smaller water tankers, supply ships (supplies back then included plenty of concubines) and patrol boats. The ships were loaded with precious silk, stones and Ming blue and white porcelain to be traded in exchange for spices, pearls, fabrics, incense and exotic animals. Zheng He presented the imperial court with lions, “celestial horses” (zebras), “camel-birds” (ostriches) and, perhaps most famously, giraffes.

I was able to see a replica of the treasure ship and the tools needed to navigate it —  like the giant rudder and an anchor the size of the small house — as well as artifacts from the era (rope, pottery, clothing, weapons, documents, porcelain, etc.) The memorial hall and park is actually built on land that used to contain Zheng He’s house and garden, but nothing from the original structure remains. 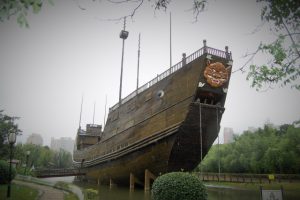 A replica of the treasure ships used by Zheng He’s armada at the Zheng He Memorial Park  in Nanjing. The fleets of enormous wooden treasure ships were built in Nanjing and sent on trading expeditions to ports on the coasts of the South China Sea and the Indian Ocean.

While the treasure ship explorations were intended to expand Chinese trade, historians also believe the Yongle Emperor sponsored them to create a strong Chinese presence in the Indian Ocean and establish a tributary system from foreign leaders. 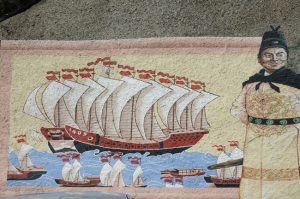 A painting of Admiral Zheng He and his fleet found in a temple shrine in Malaysia (Photo:Chris Hellier/Corbis )A statue of the maritime explorer at the Zheng He Memorial Park in Nanjing.

But China’s age of exploration ended just as Europe’s was beginning. After the Yongle Emperor’s death in 1424 his son, the Hongxi Emperor, permanently suspended overseas naval expeditions and burned the fleet of treasure ships.

Zheng He died at the age of 62 near the end of his seventh voyage. Before that, when he was 60, he erected two granite tablets in modern Liuhe and Changle (in Fujian Province) memorializing his naval expeditions. The Changle inscription, in addition to reiterating his devotion to the sea goddess Tianfei, details some of the countries and sights witnessed by the Admiral and his men:

“We traversed more than one hundred thousand li of immense water spaces and have beheld in the ocean huge waves like mountains rising sky-high, and we have set eyes on barbarian regions far away hidden in a blue transparency of light vapours … When we arrived in the distant countries we captured alive those of the native kings who were not respectful and exterminated those barbarian robbers who were engaged in piracy, so that consequently the sea route was cleansed and pacified and the natives put their trust in it. All this is due to the favours of the goddess.”