If you are a fan of Japanese food then you have probably seen these cute rice balls in Japanese restaurants, and even in episodes of classic anime like Pokemon. Onigiri are an amazing part of Japanese food culture that can be enjoyed at any time of the day: as a full breakfast, a mid-day snack, or as part of a lunch meal.

Onigiri is the go-to food for many busy Japanese people, being so cheap and accessible. After sushi became such a popular staple food across the world, these humble Japanese rice balls have also garnered a fair share of love and attention, and for good reason.

Despite their plain and humble appearance, the onigiri has a lot going inside its white (or garnished) surface. It can be stuffed with a variety of ingredients, which makes this seemingly boring dish extremely exciting and delicious.

No wonder it’s a hot-selling item at the convenience stores, street-corner shops, and specialised restaurants in Japan.

If you are new to onigiri, or are planning to try making some from scratch at home, then here’s some useful information about the history, design, contents, and traditions of Japanese onigiri. Consider this your guide to the Japanese rice ball.

While onigiri may not be as popular as sushi is worldwide, they are slowly getting there, as they become more and more recognisable all the time. The sheer simplistic beauty of this dish is that it can be enjoyed in so many ways – flavoured, grilled, or garnished.

Read More: A Guide to Japanese Snacks (And Where to Buy Them)

The History of Onigiri Rice Balls

Onigiri is a type of Japanese food prepared with cooked white rice that is formed into triangle or circle shape. They have a deep-rooted history that goes back to the 1st Century CE.

During excavations, hard clumps of steamed rice have been found at ruins in Japan that date back an incredible 2000 years ago. These were probably used as food for foot soldiers and easy meals for travellers making their way across the islands of Japan.

Even today, that simple and easy philosophy of onigiri remains intact. The dish is indispensable to everyday Japanese people, much like a sandwich is for Western people.

Often referred to as a kind of Japanese fast food, onigiri is made from steamed rice, dried nori strips, and various types of fillings. They are traditionally prepared by moulding the rice by hand and, if you wish to try this fun process at home, then there are several onigiri filling ideas for you to try!

The Journey to Modern Day Onigiri

What started as a clump of rice became more like the onigiri we know today during the Heian period (a time when Kyoto was the capital city of Japan), when it was known as tonjiki.

In the mid Edo period (after Tokyo became Japan’s capital city), nori — the processed sheet form of seaweed — became more readily available to ordinary people and this was when the onigiri wrap was invented. With the nori wrap or strip, people could now eat the rice balls without getting their fingers sticky from the white rice.

Onigiri has several other names, including nigirimeshi and omusubi, based on their regional influences and different shapes. Despite a few variations, onigiri became the most commonly-used name for the dish not only in Japan but in many other parts of the world.

Although we usually think of triangular shape with a nori strip outside when talking about the Japanese rice balls, onigiri may come in various other forms too. So, if you come across flat or cylindrical onigiri, or rice balls wrapped in other things, don’t be surprised. Here are seven interesting types of onigiri.

A common myth about the dish is that there has to be a filling inside, but this is not necessarily the case. A plain and slightly salted ball of steamed rice is also known as onigiri. It may have no fillings or wrap on the outside. This variety tastes best when you use the finest quality shinmai (first crop) rice to savour the pure flavours.

A tip for onigiri beginners: if you wish to make the dish at home, make sure you use short-grain rice as it has a sticky texture. Medium grain rice may also work to some extent but long-grain varieties are a complete no-no as they will not stick together to form that unique and satisfying onirigi shape.

Also, ask for the new or first crop of the harvest season or shinmai variety at the grocery store.

This is the most common type of rice balls you find at the restaurants and also see in the bento boxes. It contains some form of salty filling inside a plain ball of steamed rice, which may be fully or partly covered with nori.

Some people who like to enjoy crisp nori over the rice balls prefer to carry the strips of seaweed separately and put them around only before eating. If the wrapped onigiri sits for too long, the nori sheet becomes soggy.

In this variety, the steamed rice is mixed with some other ingredients such as green peas, bonito flakes, radish leaves, or sesame seeds. As the rice is already flavored and mixed with other ingredients, it usually does not contain any other filling inside.

This type of onigiri is easy to prepare at home with minimal ingredients and you don’t have to completely cover the rice balls. It may have a small nori strip or none at all. While anything may be mixed with the rice, we suggest that you use something that’s not too oily or moist.

This is again a common variety you can see at the restaurants — different seasonings, herbs, and seeds sprinkled over the rice balls. Besides making them look more appealing, this also enhances the overall taste and texture of the dish.

Some of the most common garnishes used for onigiri sprinkling are toasted sesame seeds, furikake (mixed sprinkles), gomashio (sesame seeds mixed with salt), and dried shiso leaves. The rice balls may or may not have fillings inside.

This is a visually appealing onigiri which is not much different from the above in terms of taste but the appearance varies. In this type, the rice ball is partially wrapped around the sides instead of covering the entire surface.

While it looks attractive with the filling peeping out of the white rice, it is rather difficult to prepare than other forms. In most cases, they use one type of filling (for eg, tuna) to create this form.

Some people don’t like the plain or mushy texture of white rice and this variation is a perfect suit for their taste buds. This form of onigiri is typically grilled over the fire on a wire rack until the exterior body becomes golden and crispy. It may then be brushed with miso or soy sauce.

Grilled onigiri taste their crispy and crunchy best when they are served hot. They tend to get chewy when cold but yet can be used as delicious bento additions. While they usually do not have fillings inside, some people like adding a little pickled stuff to enhance the flavor.

Nori or seaweed is the most popular type of wraps used for this dish. However, you may use various other substitutes if you don’t like the appearance or taste of nori. Or, in case you have run out of nori sheets and need to make rice balls immediately, try the alternate wraps.

Some examples of alternate wraps are green shiso leaves, pickled green leaves, dried kombu seaweed, pickled nappa cabbage leaves, salted lettuce leaves, kimchee, or so on. The rice balls inside the wraps may be filled or unfilled.

The fillings may be cooked, grilled, pickled, salted, or even raw. Some of the most common filling ideas for onigiri are flaked salted salmon, salty cod roe, bonito flakes mixed with pickled plum, shrimp tempura, chicken karaage and so on. Previous
9 Post-Apocalyptic Novels from Around the World 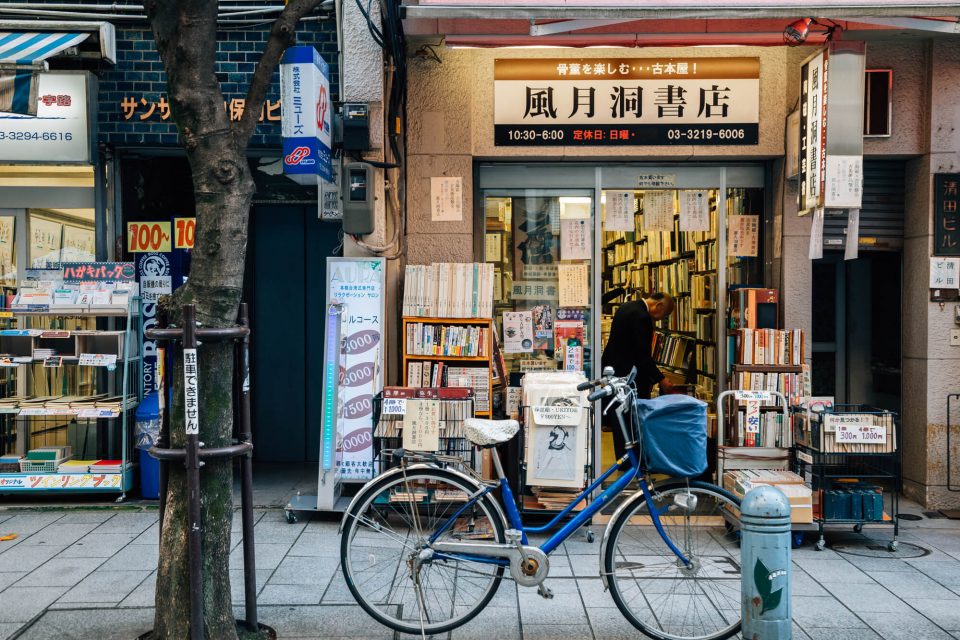 Next
How to Explore Jimbocho: Tokyo's Booktown
Click here to cancel reply.
As an Amazon Associate, we earn from qualifying purchases at no extra cost to you. This post may contain affiliate links that earn us a commission.