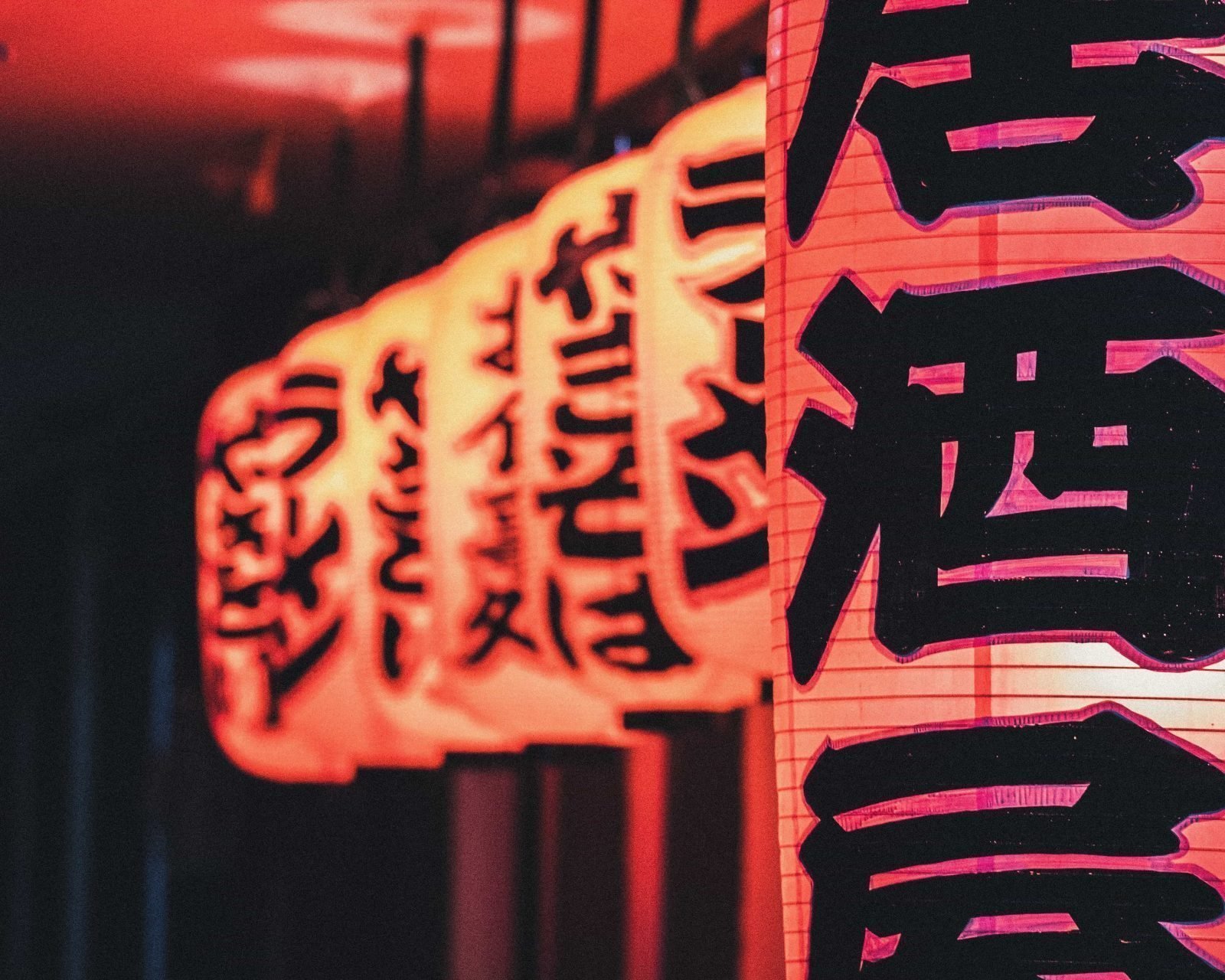 The Japanese language is very distinct from English, most notably in its grammar. To give an example, a sentence like “I eat rice without chopsticks” would be ordered grammatically in Japanese like “chopsticks without I rice eat”. However, this difference doesn’t make travelling across Japan impossible without being fluent. A few basic Japanese phrases can carry you so far in Japan. In fact, many foreigners spend years living in Japan just relying on stock phrases here and there and a polite smile.

The two best things about Japanese for people visiting Japan are its simple pronunciation and the frequent use of English words within the Japanese language (which we’ll talk about in a moment). Japanese is pronounced almost exclusively in consonant-vowel pairs (such as ka, ke, ku, ki, and ko), meaning there is very little difficulty when it comes to pronunciation. It’s a very mathematical language that adheres to strict rules which are easy to follow, making pronunciation not only easy but fun to grasp!

(If you’re interested in going further with your Japanese study, here’s a book which I found tremendously useful when studying – much better than the text books you usually get recommended).

So, let’s take a look at some of the basic Japanese words and basic Japanese phrases you’ll need for a trip to Japan, as well as common words you’ll overhear on the street, a few grammar and pronunciation rules, and a few interesting Japanese language facts to help you out!

Two quick notes: Before we dig in, there are two Japanese words you’ll hear and say a lot. They’re the first two rules you need to learn and they’re very simple. First is that, in Japan, they voice their question marks. Question phrases always end in ka. Ka is a question mark. And the second is desu (pronounced without the u, like dess), which basically means ‘is’, and it comes at the end of a sentence. For example: This is a pen = Kore wa (this thing) pen desu (pen is). So, just get used to the word ‘is’ being placed at the end of a sentence. You’ll see it all the way through the rest of these Japanese phrases. Another example from later in this article: How much is this? = Kore wa (this thing) ikura (how much) desu (is) ka?

The places you’re most likely to visit and actually engage with local people in are shops (including convenience stores), bars, cafes, and restaurants. Here are the most common phrases you’ll hear and need to use when navigating a basic transaction in a Japanese shop or restaurant.

How much is this thing? – Kore wa ikura desu ka?

So, a typical simple interaction in a Japanese convenience store (where you’ll frequently pick up useful items, food, and snacks) would play out like this:

You: *Pointing to a delicious fried chicken stick near the country* Kore wa hitotsu onegaishimasu (this thing one please)

Now, this conversation isn’t perfect, but it’s simple and it works. Japanese actually has different counters for every shape of thing. A different way of saying ‘one round thing’ or ‘one long thing’. And, in truth, even local people forget which is which. So, the safest thing to do is use hitotsu for one and futatsu for two, regardless what the thing you want actually is. They always work.

Asking where, when, and what in Japanese

As you can probably guess, the danger with asking questions is not understanding the answer they give you. So it’s best to ask questions that can be answered with visual cues. Knowing how to ask where a place is works fine usually, because people can point or even guide you somewhere. Likewise, if you ask how much something is, they can resort to counting on fingers. It’s crude, but it works! And you’re just looking to get by, after all. So here are a few Japanese question phrases to help you along.

The rules and patterns for ‘where’ go like this: doko = where, koko = here, soko = there, asoko = over there. All words ending in ko, making them quite easy to muddle up. So take a minute to get them square in your head.

The word for ‘what’ is actually nani but when paired with desu (is), it gets shortened to nan. Also, the literal meaning of ‘when’ is ‘what hour’ or ‘what time’ hence why nanji (when) is made up of nan (what) and ji (hour/time).

Place Names to Ask For

Here are some common places you might want to ask for and pair with the phrase ___ doko desu ka?

So, say you’re in central Tokyo and you want to know where Shinjuku Station is, you can say to someone on the street:

You’ve already just seen an example of how to use ‘excuse me’ in Japanese, so let’s get a clear list of all the most common polite phrases you might need to use when talking to a strange, sales clerk, or waiter in Japan.

You might notice here there are two options when it comes to the word ‘please’. Typically, in polite conversation when you’re asking for a thing in a shop, you can use onegaishimasu. But you can think of kudasai as like a favour. If you ask someone to please wait a moment, you would say chottomatte kudasai.

There are also levels of politeness in Japanese which you might notice or overhear, but they’re not necessary to worry about as a tourist in Japan. For example, you can typically shorten ‘thank you’ to simply arigatou or even doumo (thanks), but sticking to the polite form at all times ensures you’ll never offend anyone, even though the polite forms of Japanese phrases are always a lot longer, unfortunately.

In Japanese, just like in any language, there are specific words, phrases, and sounds that are repeated by everyone all day every day. Think about how often you might use these words and phrases in your daily life: like, um, y’know, maybe, sure, hang on, oh well, never mind. You’ll hear the Japanese equivalent of these phrases constantly, and if you’re confident enough you can even insert them into your own sentences to make you seem more local and confident than you might actually be. Here are some examples:

Quick note: There is a difference between eto and ano. Ano is typically used at the start of a sentence, to prepare the listener for what you’re about to say (there’s probably a technical word for this kind of sound/word but I don’t know what it is). Whereas eto is used as a placeholder for when you’re trying to remember a word or choose what word to use next, just like how we would use ‘um’.

Quick note 2: You’ll hear shouganai all the time as a fantastic expression of Japanese philosophy and psychology, demonstrating how people in Japan typically concede if something seems to be out of their hands or beyond their control. Like, ‘oh well, we tried our best’.

Quick note 3: Sou desu ne and sou desu ka are both used in conversation from the point of the listener. They’re a way of nodding along and showing attentiveness. In Japan, people don’t sit quiet and listen to a story; they engage with it actively by repeating sou desu ne or simply sou.

These phrases, typically referred to as Japanglish, are everywhere. You’ll hear so many English words in Japanese which have been twisted up to be easily pronounced by a Japanese tongue. And some of them make it very easy for you to learn basic words to use on the street or in a restaurant, since they often refer to western foods and vehicles. Such as:

As you can see, all of these were once English words, but have been altered to fit the Japanese rules of pronunciation, just as we’ve done with so many Japanese words in English (like karate, karaoke, and kamikaze, none of which we actually pronounce ‘correctly’).

Fun fact: These days, Japanese people typically use the Japanglish word suutsu for suit, but they also occasionally use the word sebiro, which is also Japanglish, taken from the English name Savile Row, a street in London famous for its tailors.

Fun fact 2: There’s a special Japanese phrase for part-time job – arubaito – which is actually taken from the German for ‘work’: arbeit.

If you want an even more fun and detailed lesson in Japanglish words, check out this wonderful and infinitely rewatchable video:

So, now you know enough Japanese words and Japanese phrases to stand a chance when shopping, dining, or exploring in Japan, but can you pronounce them all correctly? As I’ve said, pronunciation in Japanese is deceptively easy. The most crucial thing to remember is how to pronounce each vowel sound. That’s it. So, repeat after me:

This applies to every word. So if we look at ‘hello’ in Japanese as an example, konnichiwa is pronounced phonetically like ‘koh-nee-chee-wah’. The two I’s both back an ‘ee’ sound, and that’s a blanket rule. Or, for another example, ‘thank you’: arigatou gozaimasu is pronounced phonetically like ‘ah-ree-gah-toh-goh-zah-ee-mass’. Here, you don’t pronounce the U at the end, just like with desu (dess). It’s a bit of an anomaly rule, but in Japanese any time you see su you have to ignore the U and only pronounce the S.

So, when asking ‘how much is this?’ ikura desu ka? is pronounced phonetically like ‘ee-koo-rah-dess-ka’. No U sound. This is one of the few anomalous  rules that exists in Japanese. One last example, to cement your pronunciation: let’s look at ‘please’ in Japanese – onegaishimasu is pronounced phonetically like ‘oh-neh-gah-ee-shee-mass’. When two vowel sounds are placed together, like in gai you can smooth them out together from ‘gah-ee’ to ‘gai’ just as you would in English.

And now you’re all set. You have enough Japanese words and Japanese phrases to get you through a trip to Japan! Enjoy!

If you’re interested in learning more Japanese, you can take this introductory class to Japanese via Skillshare, and get a 30-day free trial for 30,000+ classes.

7 Great Tokyo Tattoo Artists and Studios to Check Out

25 Best Bars in Tokyo by District – Cocktails, Sake, and Whisky

10 Tokyo Festivals and Events You Must Experience

What to Eat in Tokyo (+ Ramen Guide)

A Guide to Japanese Snacks (And Where to Buy Them)