Born in Busan, having grown up between South Korea and Canada, and currently residing in Chicago, Emily Jungmin Yoon is poetry editor for The Margins, the journal of the Asian American Writer’s Workshop.

Her 2017 chapbook Ordinary Misfortunes won the Sunken Garden Poetry Prize and she published her first full length collection A Cruelty Special to Our Species in 2018.

She also selected and translated poems by a number of Korean authors for ‘Against Healing‘ as part of Tilted Axis Press’s chapbook series Translating Feminisms.

Yoon’s voice sounds distinctly modern yet, in a very real way, this is poetry at its most primal level.

Namely, the use of language to form unexpected and transformative connections between seemingly distinct and unrelated things; an attempt to circumvent the restrictions of everyday speech and voice thoughts and truths that would otherwise evade expression.

She forges links between past and present, tragedy and entertainment, oppressor and victim, connecting the personal to the national, building bridges across continents and forcing language to examine and deconstruct itself.

It opens with News, a response to the tragic Sewol ferry disaster of 2014 that lead to the deaths of 304 people, mostly high school students, in which Yoon employs the odd coincidences of language to convey Korea’s grief and difficulty in coming to terms with such tragedy:

“There’s an article on how to eat an apple./But I am eating a pear and thinking/pear in Korean is a homonym for ship or boat/and stomach, how MV Sewol sank, how Sewol/means beyond the world and is homonymous with/the passing time or life…/…A homonym for apple is apology, I am sorry,/I say to the pear’s core, to the seeds in the sunken belly.’

Although only 25 pages in length, Ordinary Misfortunes took me a couple of hours to get through as I found myself having to pause every few lines to stop myself from crying in the middle of a crowded coffee shop.

This is particularly as much of the chapbook confronts the horrendous and sickening injustice of the “comfort women“: young Korean women who were essentially forced to be sex slaves for Japanese soldiers during Japan’s occupation of Korea.

Testimonies sees Yoon using her poetry to amplify the voices of several former comfort women, taking quotations from their actual testimonies and incorporating them into her poems.

She explores this theme further in her collection A Cruelty Special to Our Species. It is brutal and uncompromising and serves as a guide to the deep wounds inflicted on these poor women and on Korea:

“Girls arrived got sick pregnant injected/with so many drugs nameless animals/exploded on top of us”. I found the following lines particularly haunting, ‘What is a body in a stolen country./Or whose./What is right in war./What is left in war./War hasn’t left Korea./I have.’

However, she’s just as unforgiving and relentless as she calls out the hypocrisy of those Korean men who, as tourists, students or workers in the Philippines, took advantage of the local women

This would often lead to getting them pregnant but abandoning them to raise the kids alone, “Do the same men read about comfort women and rage with all of us, keep Bibles in their desks and preach, Violence begets violence?”.

In Hello Miss Pretty Bitch she expands the scope of her anger further, calling out Seth Rogen’s 2014 satire of the North Korean regime, The Interview, for what she takes to be an insensitive and poorly executed attempt to get a quick laugh out of the decades-long dictatorship:

Yoon’s writing is spare, unforgiving, and unflinching; her anger honed and focused; each line like a sniper’s bullet and she truly does hit all of her targets with a frightening precision.

Given that the issue of the comfort women still sours relations between Japan and South Korea to this day, as well as the uncertain spectre that North Korea casts over international relations between both Eastern and Western superpowers, Ordinary Misfortunes can legitimately lay claim to the all too often squandered accolades of essential, important and necessary. 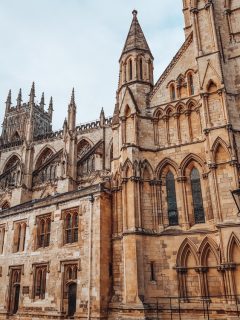 Next
11 Unique Things to Do in York (Local Secrets)
Click here to cancel reply.
As an Amazon Associate, we earn from qualifying purchases at no extra cost to you. This post may contain affiliate links that earn us a commission.