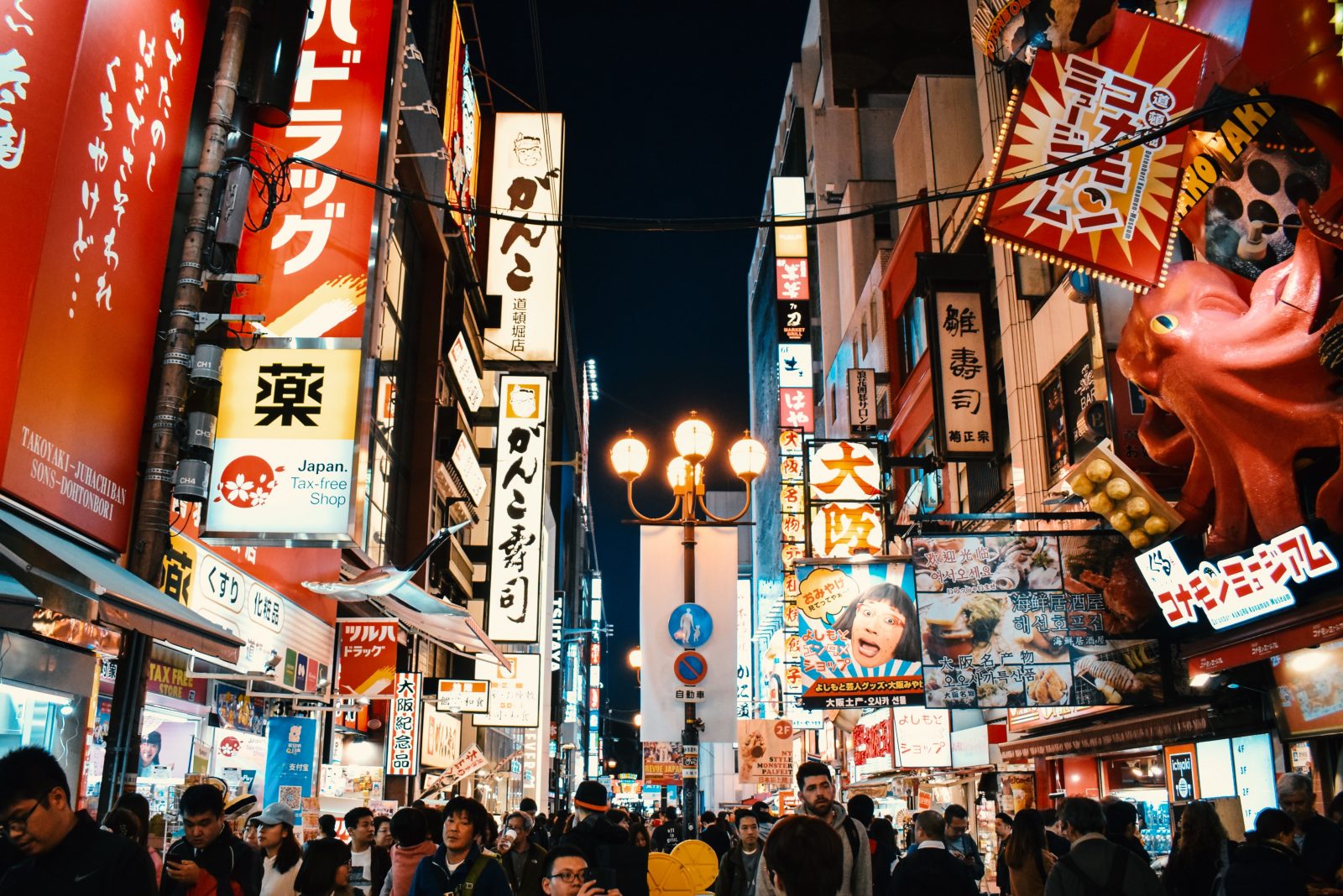 Osaka is known for being the artsy, fun-loving little brother of the country’s capital. It’s a city of stand-up comedy, great bars and restaurants, and so it only makes sense for there to be some fantastic Osaka tattoo artists and studios to visit when you find yourself in Japan’s coolest city.

This selection of Osaka tattoo artists offers a broad range of styles and influences, from the traditional tebori tattoo method to old-school-inspired Japanese dragon and koi fish tattoos. You’ll also find wild cards who think outside the box to deliver fantastic script tattoos, photorealism, anime-inspired art, and more! These are ten of the best tattoo artists and studios in Osaka, Japan!

When you’re looking at the uniqueness that the Osaka tattoo scene has to offer, Tomoya is the most spectacular example of that. Tomoya’s tattoos are, to put it frankly, an ingenious approach to design. Taking traditional Japanese art and classic Japanese tattoo art and turning it into something cute and kawaii, with a colour palette that’s recognisable and individual.

So many tattoo artists around the world do a great job of capturing the style and design of Japanese yokai, noh masks, dragons, koi fish, samurai, geisha, and, well, you get the point. But not many of them take those beloved and traditional concepts and breathes completely new life, energy, and colour into them.

It’s bold, daring, adorable, and full of vibrancy. Tomoya’s art stands head and shoulders above that of his contemporaries. Is he the best tattoo artist in Japan? Well, that’s for you to decide, but he’s certainly one of our favourites.

Chapi is perhaps the most celebrated Osaka tattoo artist around, and you only need take one quick look at his art to see why that is. Chapi has made a name and an image for himself by designing and delivering bold, bright tattoos bursting with the sharpest colours.

Chapi’s tattoos are the definition of kawaii culture, and they actually manage to shimmer. There’s a sweetness to them but that doesn’t detract from how expertly designed and crafted they are. The colours in Chapi’s tattoos complement one another expertly and the way he plays with his subject matter is magnificent.

Almost all of Chapi’s tattoos are inspired by either traditional Japanese art or modern pop culture. That means anime, video games, and western cartoons. Rather than aping the exact art that he’s inspired by, Chapi expertly takes these inspirations and reinvents them in his own distinct style. If you’re in the market for a unique Pokémon tattoo, Nintendo tattoo, or a fresh and bright take on traditional Japanese tattoo art, Chapi is the artist for you.

There is no artist on this list as unique and unmatchable as Honma. If you’ve ever spent time admiring the tattoo art that comes out of Korea, you’ll know that so many Korean tattoo artists really push boundaries and come up with styles of tattooing you probably thought impossible. Honma, originally from Korea and tattooing now at Needling Ink, Osaka, is certainly one of those impossible artists.

Honma’s style of tattooing could perhaps be best described as a ‘sticker style’, taking art that’s both original and inspired by cartoons, anime, and other pop culture, and committing it to skin with as much detail and precision as a sticker.

Rarely do Honma’s tattoos have borders or backgrounds; instead they stand on their own as a single piece of art. What’s most impressive is that, if they’re inspired by other artworks, they are beat-for-beat identical recreations of their source material. It is uncanny, bordering on insane. And that’s what makes Honma so entirely special as an Osaka tattoo artist.

Given that Honma is the second artist we’ve mentioned who works out of Needling Ink, it’s safe to call Needling Ink one of the very best Osaka tattoo shops, and a place very much worth checking out when you visit Osaka.

So far, we’ve covered three of the most uniquely original Osaka tattoo artists working today, but what if you’re in the market for a truly traditional piece of Japanese artwork? For that, you can’t do better than Horinara Ikeda.

Ikeda specialises in traditional tattoos of Japanese art and, occasionally, western old-school tattoo art. So, if you want a yakuza style tattoo of a dragon, a noh mask, or a yokai, Ikeda is the Osaka tattoo artist for you. Likewise, if you want to get a truly old-school western tattoo in the vein of Sailor Jerry, Ikeda absolutely nails those as well. In short, for purely traditional tattoo art, Horinara Ikeda is the best tattoo artist in Japan.

In spite of maintaining the tradition of Japanese tattooing, Ikeda still managed to demonstrate a surprisingly sharpened breadth of styles, including the aforementioned western traditional art but also art inspired by animation and black-and-grey photorealism. Impressive!

Horishachi is the only artist on this list who tattoos using the traditional tebori tattoo style that was once common practice in Japan. Tebori (literally ‘hand carving’) is the method of permanently transferring ink to skin by using a long wooden brush tipped with metal needles to chisel the ink into the skin. It sounds nasty on paper, but we’ve heard that it’s actually a less painful method of getting a tattoo! Although, full disclosure, we haven’t tried it ourselves yet (but we are eager to).

If you’d prefer a tattoo using the more common machine method, Horishachi does that, too. Either way, what you’re getting here is true traditional Japanese tattooing in its rawest form. That means both the method and the art itself. Clouds, dragons, phoenixes, omamori charms, koi fish, samurai, geisha – every piece of traditional Japanese art can be replicated on the skin perfectly by Horishachi, either using tebori or a modern tattoo machine.

It is something truly rare when you stumble upon a tattoo artist who can be faithful to traditional Japanese art while also developing a style that is recognisably their own. We mentioned at the top of this list that Tomoya from Needling Ink manages this, but his art is completely distinct from its source material in many ways. Dragon, however, toes that fine line between traditional art and original designs.

Workaholic is one of the coolest Osaka tattoo shops, one that pays homage to its tattooing roots while refusing to be stale and re-tread old ground. Dragon’s tattoos are all about that traditional Japanese and traditional western tattoos in equal number, and about delivering both styles with class and substance. It’s not quite neotrad, nor is it old-school, but something sitting perfectly in-between. Real old-meets-new artistry.

If there’s one place where an artist like Crashbuild to make an enormous name for themselves, it’s Osaka. You likely won’t find a similar tattoo artist working in all of Japan. And, if you’re interested, Crashbuild also a designer. So, if you like their approach to art and design, you can get it on a t-shirt, tote bag, or a beanie!

The art of Crashbuild is truly punk; art with a true gives-no-fucks attitude, which is what so much of tattoo culture is based on. There’s a rawness to the simple black and colourless lines with minimalist tone and shading. And yet, there’s real artistry to the faces and expressions captured in much of Crashbuild’s original designs.

Many of the designs you can see here evoke a punk theme and ethos: abstract art, skulls, roses, ravens, delightfully deathly things. The art you can see here not only invokes but actively encourages a confident sense of freedom and experimentation that may not be for everyone. But for those it is for, this tattoo art is irresistible.

This is a name you might recognise: the late Horihide was a legendary 20th Century Japanese tattoo artist who once worked alongside the equally legendary Ed Hardy – the man who is famed for bringing Japanese tattoo art to America, and who also studied under Sailor Jerry.

This Horihide studied under the legendary master, and so our Osaka tattoo artist and owner of Good Times Ink is Horihide 2, chosen as he was to be successor to Horihide. What a name to live up to; and live up to it he does!

If you’re looking to get tattooed by a true legend of the craft, you couldn’t do better than Horihide 2! His art is some of the most refined Japanese artistry we’ve ever seen. He also studied in Australia, bringing traditional western tattooing to Osaka and becoming a true master of both traditional Japanese tattooing and old-school western tattoo art. A true legend and one of the best tattoo artists in Osaka!

Yusin owns Untive Tattoo Works in Osaka and dabbles in an enormous range of tattooing styles. Traditional yakuza-style Japanese tattoo sleeves and enormous back pieces of dragons and koi fish. Photorealistic black-and-grey tattoos of both faces and objects. Soft, bright, watercolour-inspired tattoo art. Yusin is an expert at all of it.

12 of the Very Best Tattoo Artists in LA

7 Great Tokyo Tattoo Artists and Studios to Check Out