Why You Need to Read Orange (Manga) Now

Written and drawn by Ichigo Takano, the Orange manga is a thought-provoking and heartwarming story told through the eyes of its main protagonist, Naho, a second year high school student.

We also follow the story of Naho’s 27-year-old future self (seen mostly through letters from the future). But while Orange is told through her eyes, it is hardly her story alone.

The beautiful Orange manga is a story about Naho, her friendships, and the sacrifices she and her friends are willing to make to save a person they all love.

Published in two omnibus volumes and a third companion volume, Orange is the kind of manga that we didn’t know we wanted, but that we all desperately need.

The Story of the Orange Manga

Orange takes place in Matsumoto, a small city in northern Nagano and largely set in the high school that Naho attends with her group of friends – Suwa, Azu, Hagita, and Chino. However, in the very first chapter, we are introduced to a new addition, a transfer student from Tokyo named Kakeru.

Before we meet Kakeru, the day begins with Naho receiving a letter from someone who claims to be her from ten years in the future. This future self tells Naho that, today, she will meet Kakeru.

The letter also includes instructions on how to save Kakeru, something that the Naho of the future failed to do, and has had to live with that regret.

When she gets to school, she does indeed meet Kakeru, and he is quickly assimilated into her group of friends. As the story continues, we learn more about not only Kakeru but every fleshed-out member of this group of highschoolers.

Naho, Kakeru, and the other four are incredibly well-realised characters with quirks, wants, loves, and detailed backgrounds. You’ll come to love each of them in their own way.

The story itself, however, toes a line of being wholesome and heartwarming while also exploring difficult themes of mental health and suicide.

While it may seem, at first, like there are too many central characters to make sense of, this in fact is one of the main charms of Orange.

Unlike a lot of other shoujo manga that normally consists of the main character and two separate love interests, this story takes a similar, but slightly more nuanced approach.

While Suwa and Kakeru are the two central characters after Naho, the others in her group of friends have a significant role to play in how the story unfolds.

Azu, Hagita, and Chino not only fit in as part of the comedic relief in a story that would otherwise be far too serious, but they also each have their own distinct personalities. Between that and their significant involvement in the movement of the plot, it really adds a lot of extra flavour.

The three main characters also bring a lot to the table — especially Kakeru, who is probably the star of the whole entire series. He’s just a high school boy, true, but he is the high school boy that struggles quietly.

He is the high school boy that drowns while everyone is watching. This is something that is explored in other manga for sure, but I think Ichigo Takano has done an exceptional job of portraying that darkness without filling readers with despair.

Not Just Another Romance Manga

Naho and Kakeru’s growth through that darkness is exactly what makes Orange stand out from a lot of the other high school romance manga that we see. Growth is a common theme, but it is not always paired in such a seemingly effortless manner.

Naho struggles with self-confidence and finding her own voice, while also trying to ensure that Kakeru’s voice is heard as well.

We find out very early on that something really terrible has happened to the seemingly lighthearted Kakeru, and Naho, with her own youth and anxieties, is there trying to help him in the only way that she knows how.

High school is where people often experience some of the hardest years of their life and Takano has not shied away from this at all in her portrayal of high school life.  Issues related to mental health really take the center stage when it comes to Orange.

Not only the “average” struggles, but themes related to death and self-harm have also been nestled into what otherwise might seem like just another casual read.

The extent to which we can experience their regrets and even what they would do to change the past is masterful in its effect only adds to the charm and complexity of the story.

The Art of Ichigo Takano

Another aspect of Orange that really shines is the artwork. Having been to Matsumoto, it is immediately clear that the author knows the city well and has drawn a remarkable likeness.

Key spots in the city are used as locations for when the Naho and her friends aren’t at school and their life-like quality only adds to depth of the story and makes it feel more real.

The characters themselves are also drawn in an extremely likeable manner. As is common with shoujo manga, the characters are cute, but there is more to it than that. They aren’t just cute — they are also simple in their cuteness.

Each character in Orange has a clearly established personality that is clear through their expressions and individual styles. Yet this distinctness doesn’t distract the reader from the story at hand. Rather, it is yet another tool that helps balance some of the darker themes.

The Orange manga isn’t the easiest story to describe without giving everything away. It’s a story that really shines through the small details and allows readers to freely explore what it means to love and to accept the consequences of your choices.

Giving away those details would be like giving away pieces of the soul of the piece and would only take away from the experience. But the takeaway is this — friendship and love are one and the same and we do not have to be a slave to our regrets.

Ichigo Takano has shown us these possibilities. They are only waiting to be explored in the Orange manga. 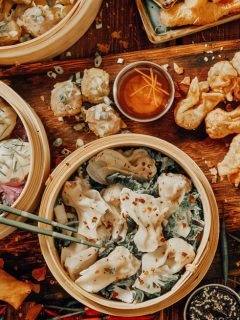 Next
Top 11 Mouth-Watering Chinese Foods
Click here to cancel reply.
As an Amazon Associate, we earn from qualifying purchases at no extra cost to you. This post may contain affiliate links that earn us a commission.