Through the Water Curtain & other Tales from Around the World

‘Fairy tales are Time Machines. They have preserved all the fears and hopes of our ancestors in the folds of their magical cloaks.’

When you stop to consider it, it’s frightening how many things set in at a young age. Gender roles is a scary one. Manners and etiquette are arguably a positive one, though they can be restricting. Stop and think a little longer and you’ll start to consider where we get these beliefs, habits, rules, and roles from: our parents, teachers, TV advertising, fashion, sports, and stories. The most popular kinds of stories for children? Fairy tales. 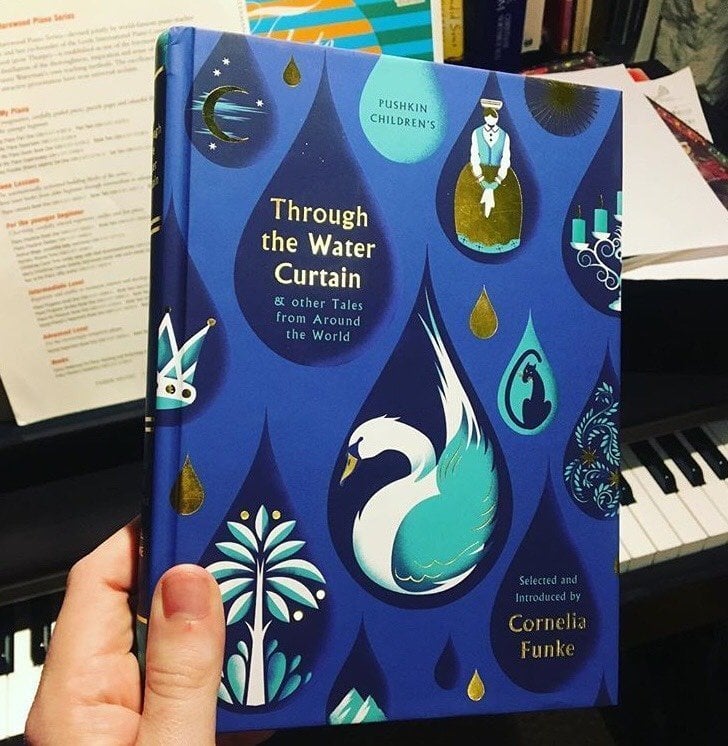 Our fairy tales teach us morality, behaviour, rules, and even the roles we play – class roles, family roles, gender roles, and so on. These roles, however, can be restricting, dangerous, unhealthy; they are worth pondering, at the very least. They are set by the stories we tell, which come from the countries we are born in.

Cornelia Funke, a celebrated children’s author in her own right, has attempted to open our eyes to the restrictions which the rules of a single nation can place on us, whilst simultaneously telling some incredibly rich, entertaining, and funny tales from every corner of the world.

Every corner might be a bit of a stretch, perhaps, but there is enough range here to give a fascinating glimpse into the tales and traditions of nations far removed from our own. Each story in this beautiful hardback is a short ten-minute read that will delight children of all ages, but what will absolutely delight readers is the post-script included at the end of each story. Here, Funke provides a little backstory to the tale and an opinion of her own. These are often insightful and thought-provoking, and they’re what define this as a book which adults can learn from as much as children can.

‘This hero from Japan is not our usual hero, who slays the monster and earns a crown and the princess. This hero learns about his talent as an artist, and the tale doesn’t celebrate physical strength, cleverness, beauty, or power. It celebrates the arts and the belief that what artists create holds the spark of life and can save us from monsters.’

Around the World in Thirteen Tales These stories, which hail from France, Germany, Sweden, Italy, Japan, Vietnam, Russia, Siberia, and Ukraine, each has a unique perspective on the hero, the villain, the prize, and the moral. They teach us what other nations value and allow us to question our or morals and priorities.

To admire the differences between these stories’ approach to teaching and exploring is a joy. The tale from Italy, found towards the end, The One-Handed Murderer, is an unabashed celebration of feminine empowerment, telling the story of a young princess caged in by her overbearing father. She fights off a murderer by herself, escapes, survives, and continues to fight for her own freedom as she goes. It is as entertaining as it is uplifting.

The story from Siberia, however, takes the exact opposite approach, telling a kind of Goldilocks take of three daughters whose father orders them to go, one at a time, to appease a god who is causing a deadly snowstorm. They must appease him by – of course – marrying him. It’s a story of female obedience and servitude and contrasts the Italian tale severely.

‘How would this tale pan out, I wondered while rereading it, if the father had had three sons instead of daughters? It would be an interesting task to rewrite all fairy tales in that manner: exchanging daughters for sons and vice versa … Yes, what if one day tales are told in such a way that men and women may finally – or once again? – be equals?’

Reading the tales from Japan, which forego knights and dragons in favour of humble monks and young artists – or the tale from Vietnam, which tells a story of both love between brothers and love in marriage all at once, with real gravity – is an absolute pleasure. To see what lessons parents and teachers of different cultures and time periods choose to impart through their stories is eye-opening, and allows us to consider our own values, and how fluid the very concept of morals and values really is.

This book is a delightful means by which we might teach our children a variety of different lessons, while simultaneously reminding ourselves that not everyone does things our way; and that’s a wonderful thing that should be celebrated.

Adult readers might also enjoy Apple and Knife, a collection of modern fairy tales with a feminist twist.