It is very easy for people to believe that their way of thinking is the right way. This can stretch from something as simple as a husband and wife debating the best time to eat dinner all the way to debating the existence of a god or gods, and to every subtle and complex concept and idea in-between. This belief in our own way of thinking is what Julian Baggini calls into question in How the World Thinks. 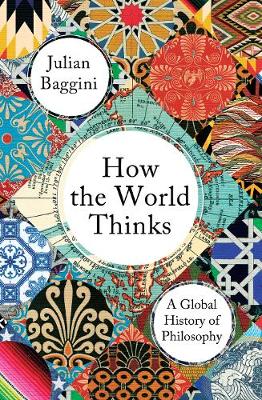 In a political climate that is causing an ever-widening gap between left and right, books like this one are of increasing importance. It is vital that we consider just how the world – the one beyond our own self, race, religion, and culture – thinks.

Separated into four parts: How the World Knows, How the World Is, Who in the World Are We? and How the World Lives, this book explores the differences and similarities between various philosophies, religious views, and social behaviours the world over. It is an ambitious undertaking, to be sure – blending history, art, politics, and philosophy – but Baginni handles it with expert deft of hand and, all the while, toeing that line between alienating complexity and patronising simplicity.

“If the first phase of philosophy can be seen as an intercontinental move away from myth towards a more rational understanding of the universe, the direction of travel thereafter differed according to region. In the West, philosophy took a step back. The major challenge of medieval philosophy was to negotiate between the claims of Christian faith and the demands of rationality … In the Far East, movement was steadier. In this absence of growth in religious authority, there was a gradual intellectual evolution.”

The way in which this book is separated is key to its huge success:

Part 1 is very much a lesson in a mixture of history and philosophy (or, perhaps, a history of philosophy), looking at how nations such as China, Japan, and India approach such topics as logic and tradition. There is a rather large focus on Buddhism and Shintoism, not ignoring the question of what separates – and what joins – philosophy and theology.

Part 2 is where the book really hits its stride, with each chapter posing a question concerning how we are to view certain topics, some of which we often simply take for granted.

There is very much a separation here – and throughout the book – between the West as having one grand philosophical and secular attitude, and the East being separated into several disparate philosophies and doctrines. This, I suppose, is simply due to a case of education: most of this book’s readers will have been raised Christian or secular, and will be far less educated in the traditions and behaviours of Shinto, Buddhist, Daoist, and Confucian peoples.

“At least since the time of Confucius, in China there has been no God or focus on the afterlife … All the important questions are about the here and now, our duties on earth, hence Chinese philosophy is often characterised as practical and humanistic. There are none of the sharp divisions between mind and spirit, heaven and earth, that are found in many other traditions.”

Empathy is very much what most readers will take away from this enlightening text. We are not only taught the history of Buddhist and Daoist philosophy, but more importantly, we are given a chance to view the world through a different lens. This book is a tool with which we can unlock other schools of thought. It is not asking a lot to consider that our own view may not always be the smartest, healthiest, or most helpful one to take in any given situation. This does not mean, of course, that we must abandon our views, become vegetarian, and meditate for two hours a day (though, if we were to, these things might well prove nothing but useful to us). In fact, even this point is wisely addressed early on.

As mentioned at the beginning, our political climate in every region, from Brazil to the Middle East, is becoming increasingly divided. This is the time for books like Baggini’s to be read en masse.

“We should not be afraid to ground ourselves in our own traditions, but we should not be bound by them. Gandhi put this poetically when he wrote, ‘I do not want my house to be walled in on all sides and my windows to be stuffed. I want the cultures of all lands to be blown about my house as freely as possible. But I refuse to be blown off my feet by any. I refuse to live in other people’s houses as an interloper, a beggar or a slave.”

Perspective is being lost with such speed it is as though a gaping hole has opened and is swallowing up our ability to assess and understand. A book like this has the power to plug that hole.