The modern discourse between generations can be summed up by pitting a baby-boomer who’s screeching, “Millennials are killing everything!” against a twenty-something hipster groaning about how their vintage artisan flat white shipping company isn’t getting off the ground. The problem with millennials like myself making jokes like this one, however, dilutes the genuine issues of late-stage capitalism, the rise of depression and suicide amongst young people, and the gradual heating of the entire planet. In Everything You Ever Wanted, Luiza Sauma uses the underpinnings of depression, existential dread, anxiety, and hopelessness felt by an entire generation in the West to craft a modern sci-fi novel that is equal parts a fictional treatise on millennial burnout and a call-back to the golden age of science fiction. 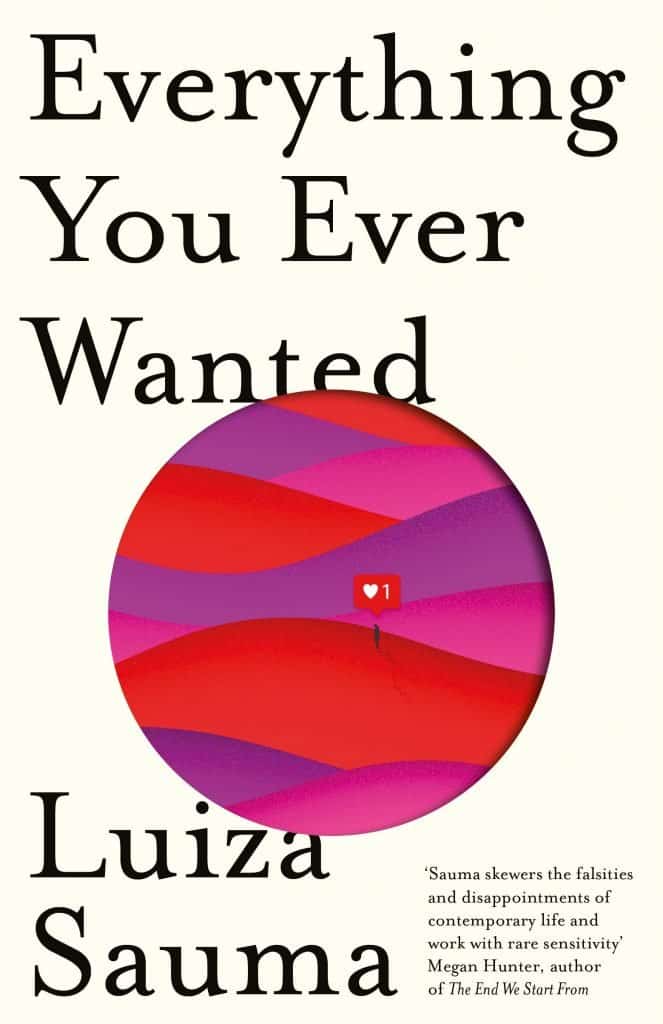 Everything You Ever Wanted is a real breath of fresh air for science fiction – a genre which has felt a little lost of late. Perhaps there’s something to be said though, in our current climate, for the current boom in the fantasy genre, one defined by its powers of escapism, versus the gloom of sci-fi, a genre that’s at its peak when it’s holding up a mirror to the current state of the world around it. Luiza Sauma has injected a little life into this genre by personalising it. Rather than grand, epic, sweeping futurism, we have here an intimate tale of one woman’s yearning for both an escape from the drudgery of our cyclical life (work, home, sleep, work) and a way to feel like she was part of something important, both personally and professionally.

“How many sunsets does a person need to see, to carry on living?”

This woman is Iris, a twenty-eight-year-old office worker in London whose job is to help brands market themselves digitally. She is deep in the toxic pond that is the capitalist machine, helping faceless, disembodied corporations maximise their reach. Suddenly, there comes news of a wormhole that has opened up in the Pacific Ocean which leads to a distant planet someone has named Nyx. On the planet, a man named Norman sets up a colony and, eventually, this colony of engineers and scientists puts out a call for a hundred ‘ordinary people’ to make the one-way journey to Nyx. Once there, they’ll live, work, and be free from the cycle of modern life forever. They’ll also have their daily lives broadcast on TV back home in a sort of Big Brother-esque reality TV show.

The first thirty pages of Everything You Ever Wanted flit back and forth between Iris’ modern life and her first few days on Nyx. This is the first breath of fresh air the book offers. It doesn’t waste pointless energy explaining where Nyx is, who Norman is, where the wormhole came from, how the journey to Nyx works. In the vein of golden-age sci-fi, it assumes you don’t care, and it’s right. We take the planet as a given, and we want to see it more than we want to understand it. I cannot thank Sauma enough for this. For disregarding the pseudo-science that bogs down and overcomplicates so much modern sci-fi with needless tedium. Here’s a planet, here’s how we get there, now let’s see it.

“Iris woke up feeling like there was a great weight bearing down on her body … The Smog’s long, smoky tendrils were reaching around her in an unwelcome, suffocating hug.”

From here, half the book is dedicated to Iris’ life on Earth. All sci-fi tropes are abandoned, and we are offered a very tangible, vivid relationship with a woman troubled by boredom and depression (manifested as what she calls the Smog – reminiscent of the Black Dog from this video). The creation of Iris, and the carving-out of her depression-streaked journey, feels very much like an indictment of modern life that pulls no punches. As, perhaps, Kafka might have done had he been alive today. Our connection to Iris may be intimate, but it also feels stale and grey given how lifeless she herself feels. This atmosphere is successfully draining.

At the half-way point the sci-fi aspect of the novel takes the wheel and we get to see a stripped-down kind of science-fiction that doesn’t deal in technicalities. In many sci-fi fans’ minds, there are three approaches to sci-fi. There’s hard sci-fi, which concerns itself with real-world science and obsesses over the technicalities of the science-and-engineering details (Arthur C. Clarke). There’s golden-age sci-fi, which uses fun and fantastical situations to explore philosophical, social, and political discussions in a more engaging way (Star Trek and H.G. Wells). And there’s really fun and bombastic hero’s tales set in space (Star Wars). Everything You Ever Wanted slots into the second bracket, not allowing the setting to define the book but, rather, using the escapist existence of another planet to discuss the current state of our society. Here is a woman so disturbed by the cycle of drudgery that is modern corporate city life – and even beyond that, a woman with unresolved issues of depression and familial turmoil – that life on a pink desert planet seems so utterly appealing. She cites having a higher and more noble purpose to her life as a reason for going, and yet we never truly see the depths and details of that desire. It’s escapism in its most absolute form, because that’s the cliff-edge our modern late-stage capitalist world has us teetering over.

Despite the daunting, looming dread, Sauma also injects Everything You Ever Wanted with a wicked wit and some fantastically funny moments that draw out both little snickers and big belly-laughs. Puncturing the dark existentialist tone of the story with little moments of real humour was a wise move that pays off in full (I especially adored the extended joke about people who shit at work).

There is a real wisdom to a lot of what Luiza Sauma has done with Everything You Ever Wanted. She has framed the novel as a millennial tale, defined by social media and hashtags, cynical references to veganism, yoga, and other trends. She has presented a sci-fi premise that is at once reminiscent of Bioshock or Terry Pratchett and Stephen Baxter’s The Long Earth but also wholly and refreshingly original, to the point of feeling energetic even in the face of depression and palpable existential dread. Speaking of which, there’s its finest glory: existing as an angry mockery of the state of modern life; our fear of fixing our world, our burnout, our lack of drive and purpose. And, at the height of its cynicism, it doesn’t offer a solution. That’s cold, but fair.

If you liked the sound of this book and want some new translated sci-fi in your life, check out Broken Stars, a collection of Chinese sci-fi stories edited by Ken Liu.