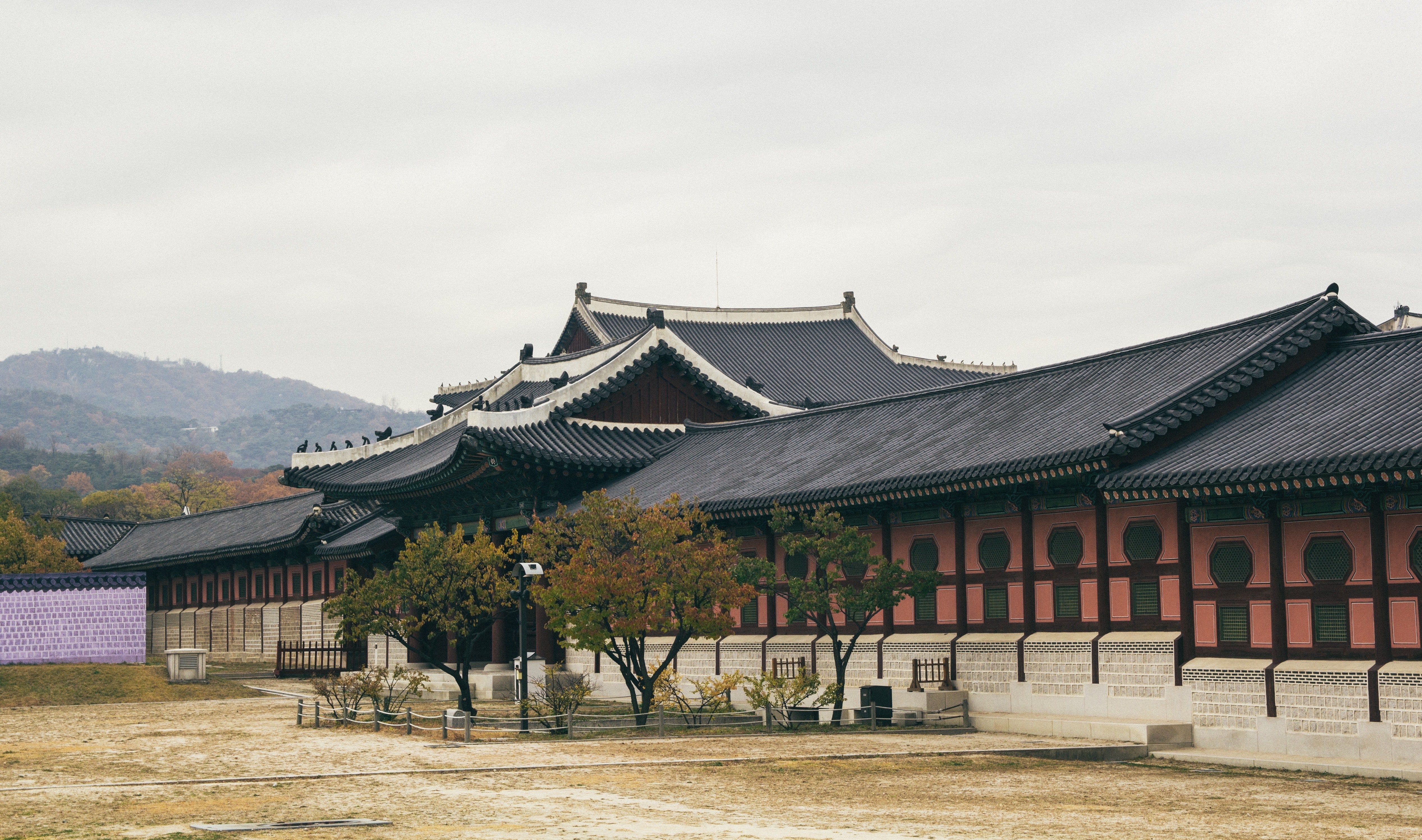 The Palace can be seen at Jeongdong Theatre, Seoul. A beautiful location with a lovely cafe to chat about the show after. We absolutely loved this play (and you can see why in great detail below). It’s on until July 2018 so you have plenty of time to go see it.

Honestly, I was open-mouthed for a good portion of it; delighted by the dazzling colour, sound, and a showcase of the best of Korean traditions. I’d see it again in a heartbeat. Seeing performances abroad is the perfect way to witness the purest traditions of a country at their most vibrant, and I was so glad to add one in Seoul to my list.

The easiest way to book tickets for this (and most other fun things to do in Korea) is with Trazy. Find out more about Trazy at the bottom.

The History behind the Play

Yeonsan-gun, the tenth king of Korea’s Joseon Dynasty, is regarded by historians as the worst tyrant in Korean history, launching two purges of the scholar elite and seizing a thousand women to serve as his own private kisaeng (entertainers and courtesans).

The greatest of these kisaeng was Jang Nok-su, a woman who rose through the consort ranks to become the voice whispering evil words into his ear, aiding him in causing so many of the travesties he is remembered for to this day.

Jang Nok-su’s rise from humble servitude to adjutant and lover of the king through her command of the arts is a tale of beauty and inspiration. This play is their love story.

Told without words, The Palace is closer in its methods to those of ballet, where dialogue is foregone, replaced with mesmerising choreographed dance routines, gorgeous traditional music played throughout, innovative projections of nature and colour, and clever use of Korean janggu drums (two-headed, hung over the shoulder by a strap and played at waist height with two sticks: one thin, one thick).

With a tone which begins warm and jovial, with some jolly games played by musicians and courtesans, but builds precisely and with perfect pacing to a powerful and anguished finale, this drama will move every audience without a single word spoken.

The janggu drums play a significant role in both the music and the story. Almost every support character wields one, and uses it to great effect in moments of entertainment, which border on pantomime, and scenes of panic and strife, where the characters fight to survive with drums rather than swords.

The range of dramatic tension available is thanks to the dynamic design of the drums themselves and the incredible skill with which the performers wield them.

In each scene where the drums play a central role, an entirely unique atmosphere is created through a variety of tempos and rhythms, choreographed dances as they play, and even the gait and body language of the actors as they playfully tease the sounds from the drums or beat them senseless in scenes of fear and struggle.

It is a testimony to the power of these drums and drummers that so much of the emotion in this play comes from the drums themselves. They are used with incredible passion and innovation. 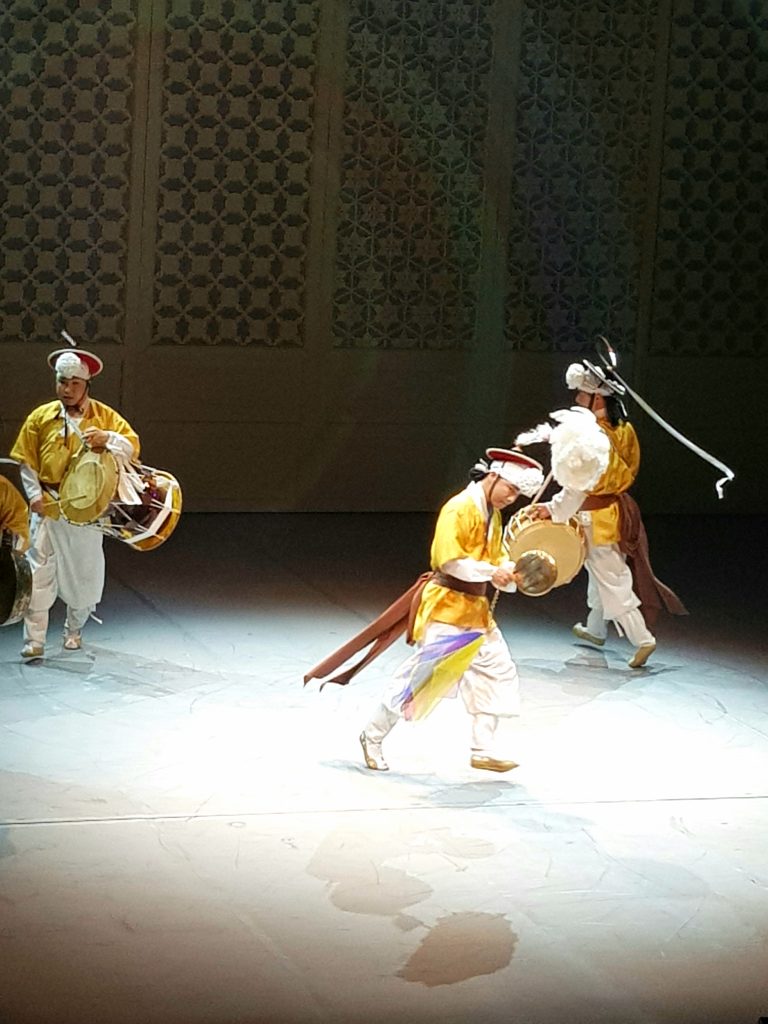 The Use of Stage

The stage itself is also as much a character as the drums are, with beautifully carved wooden screens decorating the flanks of the stage, sliding and drifting frequently to transform the setting effortlessly.

Projected onto these screens are images of cherry blossom trees, their petals falling and dancing, as well as autumn leaves and rainfall.

These simple projections have an astonishing effect on the atmosphere of the stage as the story plays out.

In an early scene, as Nok-su practices her calligraphy and is berated by her teacher, a transparent film-like screen is lowered, separating the audience from the actors. Onto this screen are projected seasonal images of snow, rainfall, and cherry blossoms and autumn leaves soaring.

It is a wonderfully evocative opening scene, demonstrating with no words and hardly any actions from the actors onstage the determination and volition of our protagonist Nok-su. Not to mention, the projections create a subtle but truly beautiful and mesmerising scene.

Another aspect of stagecraft which must be complemented is the design of the costumes and props. In recent years, the traditional Korean hanbok has made a massive comeback, with rental stores popping up near every temple and traditional street and village in Seoul and beyond.

On stage, these hanboks cut a powerful figure on their wearers. Immediately recognisable as East Asian garb, reminiscent of the clothes seen in Chinese martial arts films and Japanese samurai movies, but all at once wholly and uniquely Korean.

A subtle aspect of the female actors’ clothing is also the vibrant and varied colour used. This is something which dramatically separates Korean temple architecture from that of its neighbours.

In both China and Japan, many of their temples and traditional wooden structures are famously unpainted, or painted in deep reds (such as Japan’s iconic torii gates) and lavish golds (Shanghai’s Jing-an Temple and Kyoto’s Kinkakuji – Temple of the Golden Pavilion). But in Korea so much of its ancient wooden structures are painted with pastel greens, purples, yellows, and pinks.

This gorgeous display of vibrancy is also adorned by the women of the stage, and is stunning to behold as the actors dance and glide across the stage. 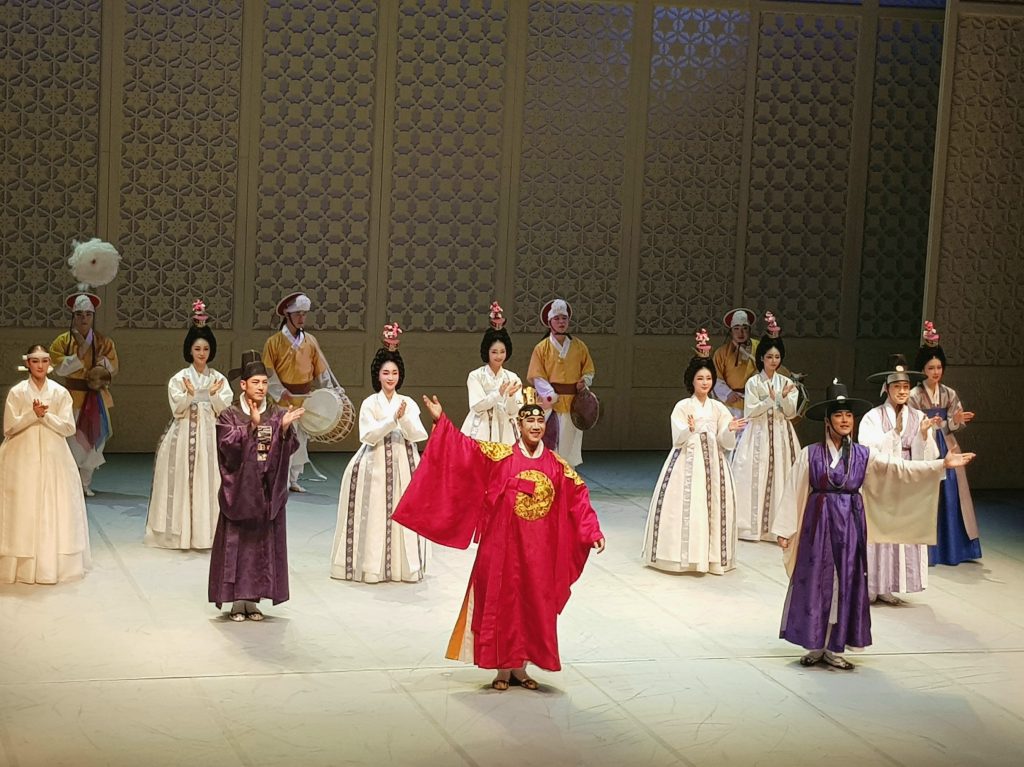 A triumphant pair of scenes which I must describe proved perfectly the power of removing dialogue from a tale with as much gravity as this one.

The first comes halfway through the story where a desperate and frightened Nok-su is confronted by eight conspirators dressed in robes the colour of midnight and masks of ivory with black eyes and engorged noses.

They carry small drums and hold them like shields at arm’s length. As they surround her, Nok-su fights back with a pair of thick drumsticks, and so begins an incredible dance-fight acted out with fear and desperation.

Nok-su struggles to barely hold back the terrible figures, and as they dance the lighting turns a blood red and a thundering tempo plays out in the background like a racing heartbeat.

It is a wonderfully tense and beautiful scene, and one of the most captivating moments of theatre I have seen in years.

The second scene is the other to feature the eight masked conspirators, who surround Nok-su’s lover, the king Yeonsan. Instead of drums, they now brandish scrolls covered with legislature (written in elegant Korean Hangeul calligraphy).

They throw the scrolls to one another, letting them unfurl on the floor; and when they are done, a perfectly symmetrical web of sixteen lines traps the king in the centre of the stage.

The web is held by the conspirators and brought to life by their moving and dancing, trapping the king very literally (and with the most strikingly Kafkaesque metaphor) in a web of conspiracy.

This pair of scenes is captivating and a joyous use of space and prop which set my heart dancing.

The Palace truly plays to the strengths of theatrical and musical power. Removing all dialogue and showing gleeful creativity with the utilisation of every other trick the trade has to offer. Here is a tale that is remarkably powerful in its telling, without telling us a single word.

How to get there?

Find out more about Korean culture in our Korea archives.