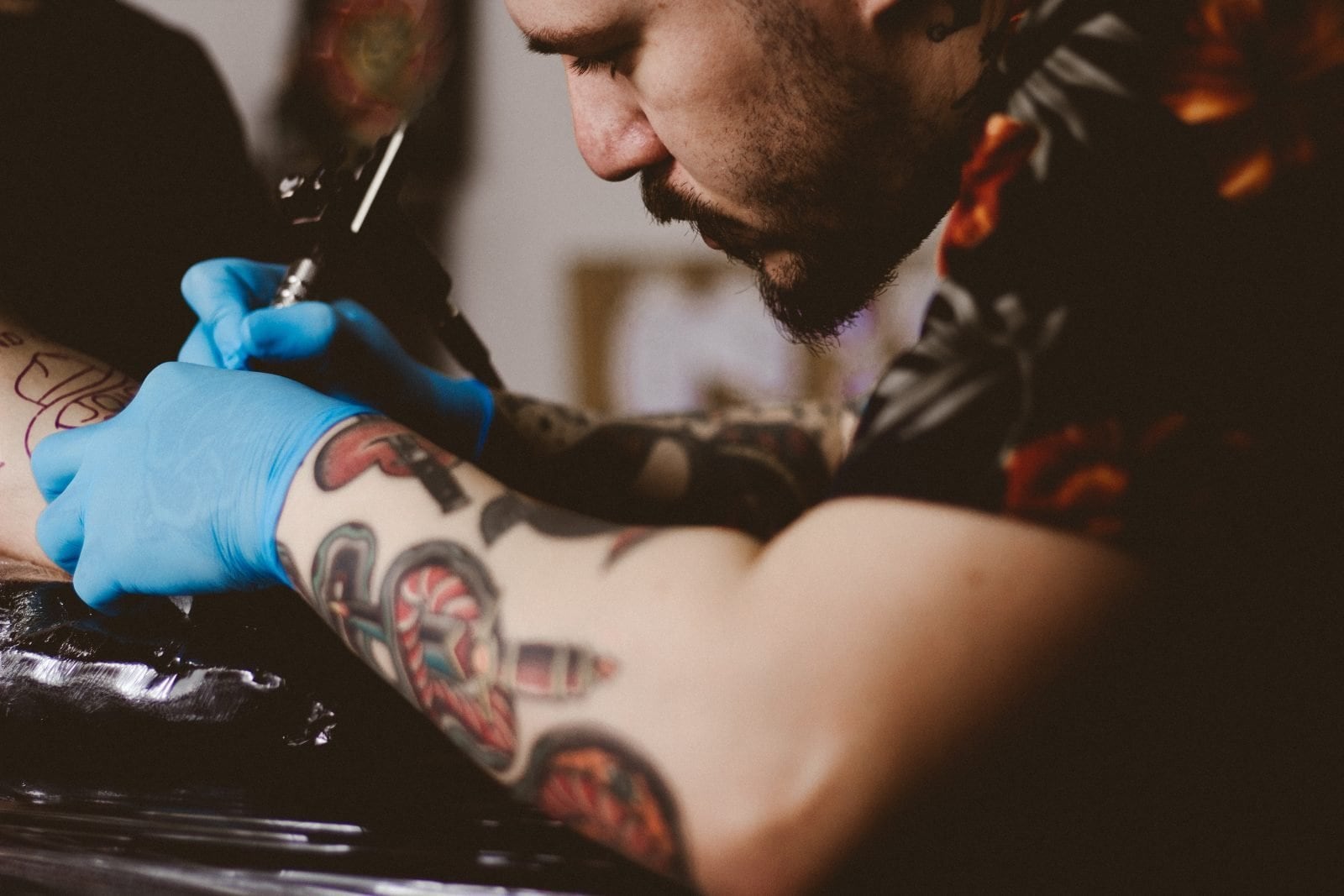 The UK is a country that celebrates its tattoo artists. Having tattoos as a millennial is so much the norm that it’s almost stranger to not have any at this point. This means that the UK is flooded with some of the best tattoo artists working in the business right now. Tattoo-lovers travel from the world over to get tattooed by a specific UK-based artist, and for good reason: UK tattoo artists are some of the best. There’s such a healthy, happy, vibrant, and dynamic tattoo industry in the UK; it’s one of the things we’re proudest of these days. Tattoo art in the UK really is art. So, let’s check out a handful of the most fantastic, interesting, and exciting tattoo artists that the UK has to offer.

Of course, this list is personal to an extent. These are artists that we at Books and Bao have a real affinity for. We’ve either been tattooed by them or desperately want to be. There’s a slight bias towards the nerdy side of tattooing here, which is all the rage right now (and we’re big nerds, so of course). But what you have here is a wide range of styles, each of which is instantly recognisable as their own. Okay, let’s jump in!

Watch this video to learn more!

Related: Check out our female-exclusive list of 10 wonderful women tattoo artists in the UK!

Josh is a tattoo artist based in Swansea, South Wales. He specialises in neotrad and Japanese-inspired designs, and his work involving animal heads (tigers, wolves, bears) are some of the best you’ll ever see. Josh has tattooed both of us at Books and Bao, and has (full disclaimer) become a dear friend. He’s a kind, impassioned, and ludicrously talented artist. Beyond that, he was raised in Botswana and has a sister who is about to become a published author! Until recently, Josh worked at Stallions and Galleons in Swansea alongside other legendary artists like Ali Burke and Dom Turner, but has now set up his own studio: Highwater Gallery.

Matt has been building and building and building a reputation across the nerdy tattoo world for the past several years. Almost all of his designs are inspired by anime, video games, cartoons, and other delightfully nerdy media. His love for the art of tattooing and the designs he comes up with can be seen in his unique take on the source material he draws from. He’s an artist giving tattooing a good and friendly name in this millennial world where the gruff sailor types are out and the sweet nerdy boys are in. Matt has recently opened up his own studio, Season One Tattoo in Preston, UK. He’s one of the most original and exciting UK tattoo artists around.

Find Matt on our list of artists of geeky tattoos!

Honestly, I’m not even sure what Kolahari’s real name is. All I know is that he operated out of The Circle in Soho, London, and he’s an artist you’ll never confuse with anyone else. Kolahari’s work is reminiscent of woodcuts (like those of M.C. Escher) and medieval artwork. Much of his art is made from simple lineworks of black and white, with crosshatching and chiselling effects which give his art that distinct Kolahari quality. Though he does also dabble in colours. Half of his designs are medieval European in style, such as tarot cards, castles, skulls, and axes; and the other half are traditional Japanese in style, such as waves, peonies, cranes, snakes, and anime or video game-inspired designs. He’s diverse in his influences but very, very distinct in his style. There’s nobody else like Kolahari. If you’re looking for the best London tattoo artist, Kolahari is it.

There’s no artist in the UK I want to be tattooed by more than Merry. Not only is he based in my favourite English city (Bath), but he also does some of the sickest dark, black, gothic designs you’ll ever see. Deep black, gloomy vibes, and slick designs. There’s nothing else like it. These are the kind of tattoos you just can’t tear your eyes away from. I’ve spent too long just staring at Merry’s Instagram page, mesmerised by the plague doctors, gothic castles, creepy snow globes, crows, skulls, and eerie creatures. It’s all too easy to become passionately invested in Merry’s work, and nobody would blame you at all.

While you’re in Bath getting tattooed by Merry, don’t forget to pick up some books at Mr. B’s Emporium of Reading Delights!

Jack can do pretty much anything, but he particularly excels at bright and bold animal and human portraits that blend cartoon and realism. He works out of Cloak and Dagger in London and he’s without a doubt one of the best London tattoo artists you’ll find. There’s a gravity to Jack’s designs that captures you and reels you in. It’s like each tattoo is a smooth pick-up line. Perhaps it’s the pure vibrancy and boldness of colour, of the tick and confident lines. Whatever it is, there’s something irresistible to Jack’s tattoos.

It’s portraits that Adam really is the master of. He leans away from absolute realism in favour of a bright and vibrant interpretation of real life. Utter realism is a risky business in tattooing that can scare many a client off, so Adam instead opts to blend vibrancy of colour with true life to create something fun and full of flavour. If you’re in the mood for a portrait of your favourite fictional character or real-life icon, Adam has you covered for sure.

Working out of The Interbellum Tattoo Lounge in Essex, UK, Kodie is easily one of the most diverse artists working in the UK tattoo artist industry today. With a style that’s hard to pin down – at times eerily realistic, at others very neotrad, and often neither – he’s truly one-of-a-kind. If you love your bright flowers, detailed creatures, colourful scenes, nerd-inspired designs, or traditional call-backs, Kodie can do it all. Seeing his ability to handle almost any kind of design and make it uniquely his own is truly awe-inspiring.

Jack Peppiette changed my mind completely about the more abstract black-and-white style of tattooing. These days the popular trends are bold colours, huge pieces depicting animals and flowers with intricate flowing script. Jack strips all of that away in favour of an intricately simple, precise, intimately beautiful, and mesmerising style of tattooing with a Polynesian and Indian influence. You can find him at Insider Tattoo in Edinburgh, Scotland, and he is well worth the trip up north. The deep dark blacks and intricate blends of flowers and geometric patterns are hauntingly beautiful, and something that can completely mesmerise you if you’re not careful. I can’t get enough of his designs.

If you’re interested in learning how to create your own incredible tattoo designs, you can take this class – along with thousands of other classes – with Skillshare, along with a 30-day free trial.

If you happen to find yourself in Seoul, Korea any time soon (although many of them guest tattoo around the world), here are ten tattoo artists there you can also check out!